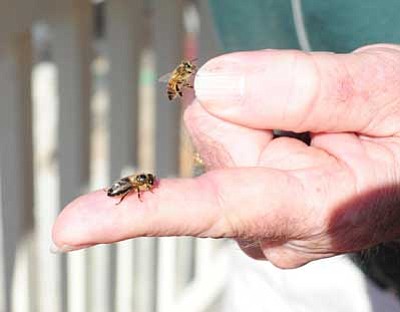 Les Stukenberg/The Daily Courier<br> Cliff Deane, below, shows off one of the beehives that he collects honey and wax from near his home in Dewey. Deane says he will remove bee swarms from people’s property for free.

Dewey resident Cliff Deane has a thing for bees and will remove bee swarms for no charge.

Deane, a retired Army officer, raises thousands of bees in Dewey, sometimes producing more than 50 pounds of honey per hive. If the bees are on trees or on the eaves of a home, Deane, 65, will relocate the insects to a bee yard.

Should he have to perform more work on a job, however, he will charge for the service.

"The last one we had, was found hanging in a tree. I got a box and some pruners, trimmed away the branches, got it and put it in a box, took them down to the bee yard and put them in a hive," Deane said.

Deane and his wife, Nancy, operate Last Shadow Apiary near their home.

Deane first became interested in bees as a child in West Virginia where he lived on a farm. After 35 years in the military, he decided to return to the hobby.

"When we get calls for bee swarms, our primary concern is life safety," Moser said. "When someone has a life-threatening allergic reaction to bee stings, we respond to that a little differently than we would otherwise."

If possible, fire crews will try to not kill the bees to keep healthy population numbers in Yavapai County.

"If the bees aren't moving and someone has a life-threatening condition, we will go in and spray some of our firefighting foam on them. Bees are very important. We're certainly not trying to exterminate bees or damage the population," Moser said.

Those who choose to keep bees, he said, provide a much-needed service in the community.

"Any time a beekeeper is required to move his bees because of a new ordinance or whatever, African hives will take up that space very quickly. Towns and cities should really be encouraging beekeepers to put bees in," Deane said.

Deane operates under the assumption all Yavapai County swarms are composed of Africanized bees.

In four to five weeks, the Africanized bees in that hive will have died off, replaced by European bees.