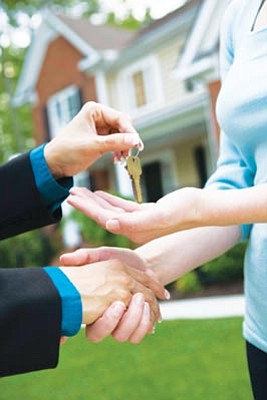 A rebounding economy coupled with interest rates in the 3 percent range have triggered a continuing increase in home sales in the quad-city area, according to several real estate agents and brokers.

"The trends are decreasing inventory, increasing (number of) buyers and improved economy and lower interest rates," said Peter Weaver, president-elect of the Prescott Area Association of Realtors and broker with the Weaver Team in Prescott.

Weaver said the local housing market turned the corner this past April when he started noticing bank-owned and short-sale homes drawing multiple offers from prospective buyers.

By contrast, during the bottom of the housing slump a few years ago, three times the number of homes were on the market as there are now, Weaver said. He said bank-owned and short-sale homes are fetching buyers because they are selling for less than conventional homes.

Banks are listing properties at higher prices now, "and they have been for three months in a row," said Spencer Collett, the top producer at USA Real Estate in Prescott Valley.

However, he said, "Right now, you can still buy a house for much less than it cost to build it because those bank-owned and short sales are the best that the market has to offer."

Collett and other real estate professionals cited a strong demand for homes selling for $200,000 or less. He added a buyer can obtain a nice house with three bedrooms and two bathrooms in that price range in Prescott Valley - and similarly for Prescott.

A similar take on the market came from Steve Irwin, owner/broker of Prudential Northern Arizona Real Estate in Prescott.

"We have a big demand for (homes selling) for $200,000 or less. It is affordable. It is a great value. They are getting immediate equity for their homes."

Irwin mentioned a retired couple who recently bought a home in Prescott at full price: Cherry Manley Greene and her husband, Mike.

Cherry, a retired medical transcriber, said she and her husband plan to move into the house after escrow closes April 12.

The Greenes have been staying with family in Las Vegas since October. The couple took a year and a half to sell their home in Missoula, Mont., where they previously lived for six years.

Cherry said she and her husband chose Prescott to retire because "it feels more like home to us than Las Vegas."

She said she and her husband did not make any bids on their new house, which covers more than 2,000 square feet and has three bedrooms and two bathrooms.

"We just saw the house and made an offer," she said.

Area real estate professionals said they have not seen strong evidence of "bidding wars" from buyers for homes. They explained bidding is more likely to take place with bank-owned and short-sale properties because the homes are selling for lower prices.

Brian Biggs, co-owner with wife Nancy of Prescott Home Realty in the Prescott Country Club, said he received five offers in under a week after putting an investment property in Diamond Valley on the market in October.

The successful bidder paid $5,000 more than the list price, Biggs said. He added he was lucky to receive one offer during the recession.

While Irwin said he has not seen "much of a bidding war," he indicated offers from buyers are arriving at 97 to slightly about 100 percent of the list prices for homes.

"So, if there is more than one offer, we will let buyers know there are multiple offers," Irwin said. "They can update that offer."

Nelson said she has received several inquiries over the past several days from new businesses that are locating in the quad-city area to find housing for their employees. The planned reopening of Yavapai Downs in May will create more demand for short-term rentals, she added.

"We are not in full-fledged recovery mode, but we are better than we have been for years," he said. He added it is an excellent time to buy a home while interest rates remain low.

Irwin concurred, saying that with the right financing a buyer can find a nice home and pay less in a mortgage than he or she would pay for rent.