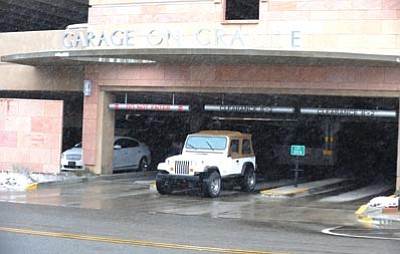 Les Stukenberg/The Daily Courier<br>Within the next two weeks, the city expects to change the configuration of the downtown parking garage’s entrance.

PRESCOTT - In an effort to make Prescott's downtown parking garage more accessible, the city is poised to make some changes to the structure's entrance.

And that could be just the first in a series of changes that are under review for the Granite Street garage.

First on Arnold's list was the layout of the entrance. The current configuration includes three lanes - one in each direction, and a middle lane that allows for either incoming or outgoing traffic.

Arnold maintained that the entrance is confusing for drivers, and that its raised median causes a hazard for vehicles.

"It is easy to hit your vehicle (on the median)," he said. "I really think a realignment could be done."

City Facilities Manager Mic Fenech said the entrance was designed to allow for a future fee arrangement, complete with an automated traffic arm. "Those lanes were designed to be narrow to accommodate (the automated parking-fee equipment)," he said.

Depending on the council's direction, Fenech said, "It can all be eliminated."

When the city built the garage in 2005, officials had considered imposing fees for the garage at some time in the future. That has not occurred, however.

Parking continues to be free in the garage most of the time, although the city charges a $5 fee on about 35 busy weekend days.

City Manager Craig McConnell noted that if the city does decide to impose more fees in the future, it likely would use a kiosk system rather than the automated traffic arm. (The kiosks would allow drivers to pay for parking at a kiosk and display their receipts in their vehicles).

Council members were in agreement Tuesday that the city should remove the concrete median at the garage entrance.

On Wednesday, Pres-cott Communications and Public Affairs Manager Melissa Preston said the change likely would take place within the next two weeks, with the public works department handling the work.

Meanwhile, other changes for the garage also will be considered.

Arnold said he had received a number of comments from business owners about the fee that downtown employees must pay to park in the garage on busy weekends.

Councilman Chris Kuknyo suggested that the city could issue stickers for downtown employees that would allow for free parking in the garage.

Currently, the parking fee for employees on busy weekends is $2. The parking attendants know most of the employees and charge them the lower rate, Fenech said.

That discussion led to a consideration of whether the city should expand its fees for the garage. Councilman Jim Lamerson pointed out that the city never intended for the parking at the garage to remain free indefinitely.

"The concept was that at some particular time, user fees were going to pay for the parking garage," Lamerson said, noting that the garage cost the city about $6 million.

Questions also arose about the cost of the security guard at the garage, as well as the cleaning schedule for the facility, and the cost of parking fines on downtown streets.

Mayor Marlin Kuykendall suggested that the council should take a broader look at the parking issue at a future meeting.