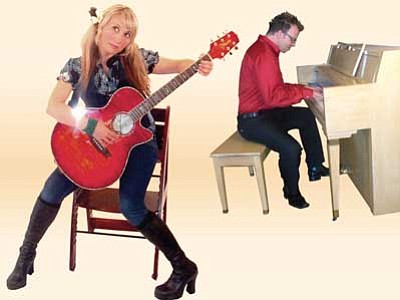 Prescott's indie pop band Dutch Holly will introduce some of its new tunes off the upcoming "Tanglewood" album during a stop at the Drunken Lass at 9:30 p.m. next Friday, Feb. 22.

Prescottonians haven't been able to catch Dutch Holly live since the Best Fest celebrated the state centennial here back in September.

"We want to show Prescott what we've been up to," Tres Ikner said.

Tres and his wife Jen are known for packing in a wide variety of musicians and instruments on the stage and on recordings, often featuring friends from Prescott. Two local friends, Steph Griffin and Akaya Lee, bring their trumpet and cello to Tanglewood.

But Tres and Jen decided it would be fun to tour around this summer as an acoustic duo to promote the album.

Jen said she's been trying to get Tres to perform as a duo ever since they sang together shortly after they met.

"I knew something special happened when we sang together," Jen said.

"When two voices come together, it makes a third voice," Tres added. "When we're really tight we say, 'Let's get that hillbilly harmony!'"

When you hear Jen's voice blending with Tres (pronounced 'Tray'), it's obvious why they decided to focus more on their sound together. You can check out one of the new tunes, Starseed, on their website at dutchholly.com.

"Really catchy track, well produced," one of their fans wrote on the track.

"I dig the message," another added.

Jen and Trey hope to release the album by the end of May.

Some of the new tracks will be part of their performance here Feb. 22, such as "Summer" and "Glory Be." Jen and Tres enjoy creating the songs together.

"We were born out of nothing, two souls equal but opposite," say the words to "Summer," which Jen describes as "psychedelic meets folk."

The words of "Glory Be" note that "It takes a sort of mindless and a certain kind of blindness to see the light." Tres describes it as an epic self-empowerment anthem.

Jen and Tres wrote, recorded, produced and released their new album on their own after trying a record company the first time around. They infinitely prefer this route.

"It's leagues different" than the first album, Jen said. "Over the last few years I think we really honed our craft."

She's excited about touring around this summer throughout the Southwest and California with Tres and their 6-year-old son Max. Tucson is one of their favorite places to perform.

Their next plan is to create video from their blogs and stream it on their website by late spring.

"It's kind of a 'reality show meets concert,'" Jen said.