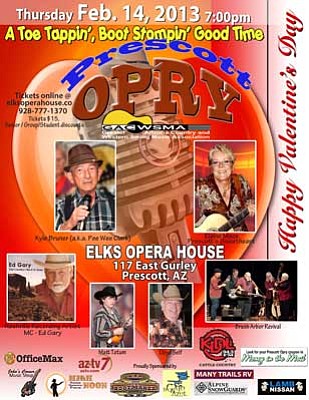 Prescott Opry lead guitarist Lloyd Self began fiddling with stringed instruments when he was just 8 - the same year he learned to drive a truck.

Truck-driving aside, it was an old-time fiddler in his native Phoenix who showed him the three positions - CFG - on a guitar, obviously sensing the young Self's interest in music. When Self broke his arm, his mother bought him a guitar for a pastime, and because he had to stay in bed and keep his arm elevated, the old-time fiddler brought his version of bedside manner to the aspiring musician. He rigged up a contraption so that he could strum the strings of that guitar, despite his handicap.

He will show the fruits of his years of strumming to an audience Thursday, Feb. 14, in a Valentine's Day show that starts at 7 p.m. at the Elks Opera House. Tickets are $15, with senior and student discounts available. To buy tickets, contact the Elks box office at 777-1370 from 10 a.m. to 2 p.m. Tuesday through Friday or go online to www.elksoperahouse.com. And, watch for a $2 off coupon in "Money in the Mail," which should arrive in mailboxes this week.

Ed Gary heads up Prescott Opry and will be the show's master of ceremonies and opener, setting the mood for the evening with a "Johnny Cash Medley" and "Cinderella."

"Prescott's sweetheart" Elaine Mace is the show's featured female artist, with a musical history that reaches back to her childhood, too.

The daughter of a Pentecostal preacher, Mace recalls that she and her two brothers formed a trio and sang, "just about anywhere folks would gather."

She and her husband, Alex, moved to the Prescott area a decade ago and since then, residents have heard her renditions of country classics, gospel, bluegrass and old-time music numbers during the Christmas season's Acker Night and at Sharlot Hall Museum events.

On Thursday, she will be singing "Cold, Cold Heart" and "Bouquet of Roses," among other favorite tunes.

Kyle Bruner of Chino Valley takes the stage as featured male artist, with 50 years under his belt "roaming the country" and Canada, singing his melodies. He's worked with a variety of bands, performing country music and "a little bit of soft rock" from the 60s, 70s and 80s, he said.

He and his band, Country Pride, played many venues in Phoenix, and he has brought the band back together here to play country music, most frequently every Friday night during the summer in Chino Valley's Smoke Shop parking lot, near the Iron Horse Restaurant and Crazy Horse Saloon.

Thursday's play list has Bruner singing such greats as "Welcome to My World," "Sunshine on My Shoulder," "It's Only Make Believe" and "Release Me."

Chino Valley High School student Matt Tatum, 15, is the evening's featured youth artist, and he will be playing his mandolin.

Rounding out the entertainment will be the voices and instrumentals of gospel and bluegrass group Brush Arbor Revival.

"It's going to be a great show," Gary said. "Treat your sweetheart to dinner and the show. It will give local people a chance to meet local heroes" who perform in the country western tradition.