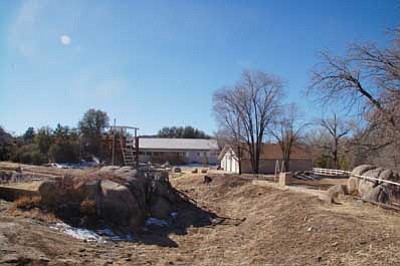 Matt Hinshaw/The Daily Courier<br> A preservation group is hoping the Prescott City Council will find a way to buy the former Granite Dells Resort with money set aside for open space purchases.

PRESCOTT - Proponents of preserving the historic Granite Dells Resort site may have to look to the voters again to generate the money for a land purchase.

That was the word from Mayor Marlin Kuykendall, after representatives of the Granite Dells Partnership made a pitch to the Prescott City Council Tuesday for preservation of the scenic rocky land surrounding the old resort site.

Referring to the city's tight budget, Kuykendall suggested after the workshop that the Granite Dells supporters should consider taking a 0.25-percent sales tax initiative to the voters to generate money for the preservation.

"I think there's an opportunity there," Kuykendall said, noting that Prescott voters decided in 2009 to extend a 0.75-percent sales tax for street improvements for an additional 20 years (from 2015 to 2035).

With the existing 1-percent streets and open space sales tax set to expire in 2015, Kuykendall said the remaining 0.25-percent could go toward buying and maintaining open space.

"It would be dedicated, and it would be voted on by the people," Kuykendall said.

But Dan Campbell of the Granite Dells Partnership pointed out later Tuesday evening that Prescott voters already dedicated money to open space - in 2000, when the streets-and-open-space sales tax got its initial vote of approval.

"It's a little disappointing, if that's the way they decide to go," Campbell said. He added that voters might not be receptive to a measure that would "go back to the people to tax yourself for something you've already been paying."

Even so, Campbell said, "It's concerning, but we're open to listen to it."

The issue is a continuation of the streets vs. open space debate that has been going on almost since the beginning of the sales tax initiative. While the city indicated to the voters in 2000 that as much as $40.7 million of the 1-percent tax revenue would go toward buying open space, it so far has spent about $16 million on such purchases.

Meanwhile, the bulk of the revenue has gone toward street improvements.

In recent months, the Granite Dells Preservation Foundation has pushed for city purchase of the Granite Dells Resort land, maintaining that the current low land values and interest rates - combined with the private owner's interest in selling the resort land for preservation - made for an opportune time for the move.

That led to the formation of the Granite Dells Partnership, a consortium of groups that support preservation of the parcel.

Tuesday's presentation featured six speakers - each with a different perspective on the preservation effort. The speakers described the granite-strewn land as "Prescott's jewel," "a legacy piece," and the "keystone" to the city's ownership in the Dells.

Kuykendall was the only council member to speak during the meeting, however.

"Group therapy is very difficult," he said, adding that City Manager Craig McConnell would be the city's point person in the ongoing discussion about the property.

"We have been listening, and we want to work with you," Kuykendall told the group. With that, the nearly 50 people who turned out for the presentation left the council chambers.

The council then heard a mid-year budget report, which indicated that although local sales tax revenues are on the upswing, other budget pressures could eat up the increases. McConnell noted that city employees have received no cost-of-living or merit raises in several years.

Although Kuykendall said the budget challenges would make a Granite Dells purchase difficult, he added: "I think it's a wonderful piece of property. I think if everybody's realistic, we can find a way to try to save it."