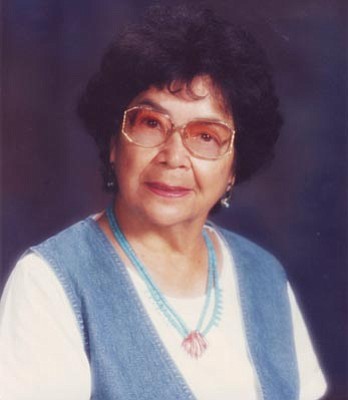 Gloria Violet Bonnaha was born Dec. 20, 1924. In the early morning hour of Dec. 4, 2013, she went to her heavenly home to be with her beloved father, mother and stepmother, Walter, Elsie and Jessie Lewis. Gloria grew up in Moenkopi, on the Hopi Indian Reservation. She knew what she wanted to be from the age of 7, when she was a patient in the hospital for the one and only time in her life. She said, "There was this nurse ... she was so pretty. I wanted to be just like her. It never left my mind. It was always my vision." Gloria graduated form Phoenix Indian School in 1942. She attended the Indian School of Nursing at Ganado. Her nursing career spanned 39 years.

In 1954, she went with a friend to the Flagstaff Pow-Wow, who in turn introduced her to her future husband Bert Bonnaha. She and Bert were married by the Justice of the Peace in Williams, Ariz. in 1955. They moved to Prescott, where Bert was born on the Yavapai Indian Reservation and started a life and family with Larry, Janice, Avis, Arleigh, Luan and Rhonda. Gloria was superior in her roll of motherhood. She was a gifted harmonica player and loved to sing and play her Christian music. She unselfishly devoted her time to her children and others in her community. She was the epitome of a true servant. In 1992, Gloria was named Hopi Woman of the Year. In the same year, she was honored with the Eli BoJack Blackfeather Award, an award that honors Native Americans nationwide for community service and for being the best role models.

The family would like to thank the Margaret T. Morris Center for their love and care the last three years.

Donations may be given to Margaret T. Morris Center or the Alzheimer's Association.