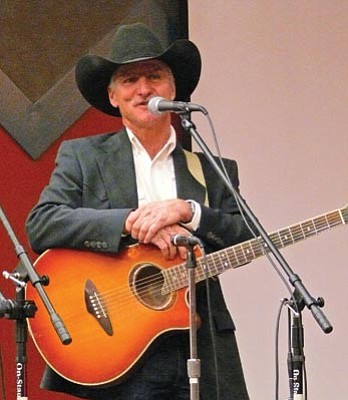 Courtesy photos<br>Gail Steiger and Mary Kaye will headline “A Cowboy Christmas” at the Prescott Center for the Arts Saturday.

Steiger, known in these parts as Prescott's favorite cowboy, is also a songwriter and filmmaker. Foreman of the Spider Ranch in remote Yavapai County since 1995, he won acclaim for his 1988 Ranch Album film, recognized as one of the best portrayals of ranching and cowboy life on film.

Steiger has walked the path of his grandfather, Gail Gardner, who was revered for his cowboy poetry and storytelling, but he has established his own persona as a cowboy poet and songwriter.

Cowboy magazine editor Darrell Arnold said of Steiger's CD of music, "The Romance of Western Life," that it is "like listening to Bob Dylan if Dylan had been a working cowboy. The lyrics are so beautifully descriptive of daily cowboy life. These are cowboy feelings, simple and profound."

The thread that will run through Steiger's songs and poems Saturday is that "gifts come along every day, not just at Christmastime."

"We have lots of things to be grateful for every day," he said.

He plans to entertain the audience with his own work, as well as a poem of his grandfather's, "Verses with a Modern Christmas Present," and one his grandmother, Delia Gardner, penned, "Hail and Farewell." This is the only poem Delia ever wrote, as far as the family knows, Steiger said. They found it in a desk drawer after her death.

Steiger will also sing a selection of songs, including "Nothing Like the Sound," and he plans to read a Wendell Berry poem, "Her First Calf."

Mary Kaye is a Texan who, as a young woman, ventured off to Utah where she "married her a cowboy." She has won numerous awards for her singing and was recognized by True West Magazine as the 2013 "Best Solo Musician of the Year." She also received a 2013 Spur Award for "Best Western Song" from the Western Writers of America, and the 2012 "Song of the Year" award from the Western Music Association.