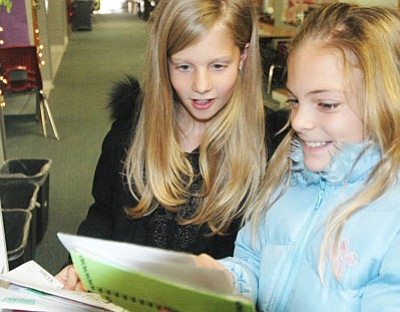 Patrick Whitehurst/The Daily Courier<br> Abia Judd Elementary School 4th graders Brekyn Waples and Morgan Engels (right) sort holiday mail to be delivered to other students at the school. The holiday post office is an annual tradition at the Prescott School.

PRESCOTT - The tradition of trimming the Christmas tree at Abia Judd Elementary School celebrates its 25th year this holiday season. The long-standing custom began in 1988, the same year the Prescott school opened its doors.

Principal Mary Anne Capp and teachers at the school first started the tree-trimming celebration to create a school tradition that would carry on throughout the life of the school, said current Principal Abia Judd Principal Rosemary Agneessens.

All students in the school, from Kindergarten through 5th grade, participate in the annual tradition, she said. Students took part in the custom Friday.

"For December they came up with two traditions," Agneessens said. "One is the tree trimming. In the beginning of December, the students create Christmas ornaments that usually end up going home for Christmas presents. They're handmade. On a certain day in December, they come in during the morning and put up their ornaments for the tree trimming and then sit down for a couple of stories from the principal."

Often, teachers will strive to match up class members with their siblings in order to allow the students to sit together during the readings.

Parents with the school's PTA also get involved by sponsoring cookies and milk for all the students following the Christmas story-time with the principal.

"Everyone has a little bit of a treat and then they go back to class," Agneessens said.

Another tradition is the school's Holiday Post Office, which is run by the 4th-grade class.

"It's great practice for writing letters, for one, and it's also a real person that you're writing to," Agneessens said. "They're pretty strict. You have to have a return address and you have to have it printed correctly and legibly. We also have a spot in the office where parents come in and can send a letter to their child, which is really fun."

Brekyn Waples, 9, has been a student at Abia Judd for five years and has participated in the school's post office every holiday season.

"The idea of the post office is to learn about letters and how to write the body and address. We mail them to friends and teachers to help students learn to write a letter," Waples said.

Waples herself usually writes to her brother and to other classmates.

"I usually ask how was their Thanksgiving was, or ask what you want for Christmas or tell them they're my best friend or best brother," Waples said.

"We get a lot of letters. It's all about writing good letters and getting them all right. We stamp them with a red stamp if it needs to be returned to sender. We draw little stamps for them and they have to say 46 cents," Engels said.