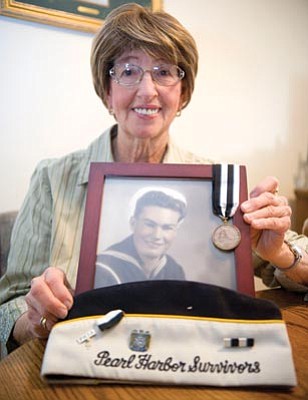 Les Stukenberg/The Daily Courier<br>Connie Lyon holds a photo of her husband Bill Lyon, a Pearl Harbor survivor who served in the Navy as a torpedoman 3rd class on the USS Detroit.

It's known as the date "which will live in infamy."

That's how President Franklin Roosevelt referred to Dec. 7, 1941, after the Japanese attack on Pearl Harbor, Hawaii, in which more than 2,400 Americans were killed. The surprise attack brought the United States into World War II.

In 1994, the United States Congress named Dec. 7 as National Pearl Harbor Remembrance Day. Pearl Harbor Day honors veterans of the attack, those who died, and their families, and marks the battle's historical significance.

Veterans such as U.S. Navy Radioman 3rd class George Hauk and U.S. Navy Radioman 2nd class Ed Sowman, Prescott's last two surviving veterans of the attack, will be honored Saturday as grand marshals for the Prescott Christmas Parade. The parade begins at 1 p.m. and starts at Cortez and Willis before proceeding along Cortez, Goodwin, and Montezuma.

"The older, original group disbanded because there were not enough men to keep the paperwork going and everything, so the Sons and Daughters of Pearl Harbor Survivors continued as a club," Lyon said.

William Lyon, who passed away in 2010, served on the USS Detroit during the attack and had just turned 18 when the attack occurred.

"He stood guard, without bullets in his rifle, on the officer's quarters. That's how ill-prepared they were," Lyon said.

With only two surviving Pearl Harbor members remaining in the club, Lyon said she hopes the Sons and Daughters of Pearl Harbor survivors will help keep the club going in order to keep the memory of Dec. 7, 1941, alive.

"We cannot forget how these young men fought for our freedom. We just cannot ever be unprepared the way we were at that time," Lyon said. "It is important that young people remember. There's so little out there anymore about Pearl Harbor."

The group meets on the first Wednesday of every month at the Golden Corral in Prescott at noon. The group doesn't meet in January, but does plan to meet the first Wednesday of February. Descendants of Pearl Harbor survivors who wish to learn more about the organization are asked to call organization president Bill Williamson at 928-708-0843. Williamson himself is the son of Pearl Harbor survivor William Williamson. His father served as a warrant officer aboard the USS Pennsylvania.

"We really need people to keep the chapter going," Williamson said. "We're required to have seven minimum and we might just squeak by."

Williamson was eight years old when the Japanese attacked Pearl Harbor. At the time, he lived seven miles away. For him, the morning of Dec. 7, 1941, started out like most others for a child his age.

"The attack was at 7:55 in the morning. Just a few minutes before 8 a.m., I was getting on the phone to call a friend and was told to get off the phone because there was a war on. My dad and I went out on the front porch. We were on a little hill and could see what was going on.

"My dad then ran off to his station on board The Pennsylvania. At about 9:15 the high-level bombers came in and we all hid under the bed," Williamson said.

Williamson later snuck out to assess the damage and collected shell casings from American gunners, which he found in the schoolyard near his home.

"A soldier came up out of a trench and told me to get out of there and go home. There were five kids who were there from the age of 3 to about nine or 10. Five of us lived about one mile from each other in Honolulu and we all live in Prescott now. It's really weird when you consider the size of Prescott," Williamson said. "They're all part of the group."