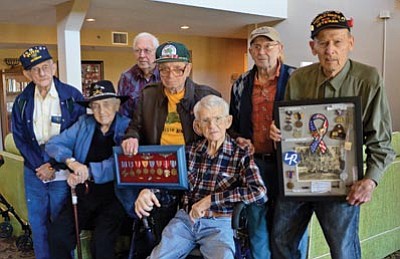 When a group of World War II veterans gathered around a table Friday to reflect on Pearl Harbor Day, one man in particular wanted to attach an addendum to the reminiscences he had shared with his friends at the Peridot retirement complex.

And what Harry Brenner, 93, said sums up what most of them must have felt about this era in American history when they came home.

"I remember returning home from France on a troop ship. We came into New York Harbor just as the sun was coming up and shining on the Statue of Liberty. There wasn't a dry eye on that boat, because this is the country that we fought for, and you don't forget it."

Brenner, Ben Waldo, Bill Kurtzman, Bruce Bodemann, Jack Chasteen, Sam Mazzara, and Gerald Chadderdon were all very young when the Japanese attacked Pearl Harbor on Dec. 7, 1941, a horrifying event that catalyzed many of them to enlist to defend our country. Despite the 72 years that have passed since then, their memories of their military service remains vivid in their minds.

Waldo served in the Army Air Corps from 1942 until the end of the war. On the day of the attack, he was sitting on a bench with a friend at a roller rink in Wichita, Kan. As they took their skates off, "Ladies came along and said they heard on the radio that Pearl Harbor had been attacked," he remembered.

"Most of us at that age didn't know where Pearl Harbor was. But we soon found out what was going on and started getting mad," and they became even more angry when they saw photos of what the Japanese did to Pearl Harbor, he added.

Waldo, 90, was an Army Air Corps 1st lieutenant bombardier who served in the Southwest Pacific and flew 45 missions, dropping bombs.

As he pointed to the World War II veterans hat he wore, Waldo added, "I wear this cap all the time ... not for accolades but to meet others" who served in the war.

Would he go to war again? "You bet, in a minute," Waldo answered. "I love this country. There's no better place to live in the world."

Kurtzman, 88, was 16 at the time, working and going to school on Dec. 7, 1941. He came home to find his home crowded with friends. "Right away, they said, 'We're in a world war. The Japanese have bombed Pearl Harbor.'"

He and his best friend, Frank Dagnan, enlisted together in the U.S. Navy in February 1943. He went to the Pacific Theater and Dagnan was sent to the European Theater. Kurtzman was part of the Navy group that made oxygen for the "air boys who needed it to breathe" and acetylene for welding and repairs to military equipment.

"We couldn't look at it as a hero's job," said Kurtzman, a machine mate gas specialist 2nd class. "They were grateful, and we were glad to do what we did. We were young boys at the time. The Japanese did a dastardly thing - destroying our Navy."

Bodemann, 88, went into the Navy Seabees and became a 2nd class machinist, serving in the South Pacific with a Marine battalion.

He was "on the farm" in his Ohio hometown when news of the attack on Pearl Harbor broke. He and his older brother, Henry, decided they had had "enough of the farm," so they went into the service. Henry was old enough but the younger Bodemann fudged his age to get into the military. He served in the Southwest Pacific from Saipan to Iwo Jima and in between.

"It was a war that had to be fought," he said. The Pearl Harbor attack "was a rotten shame... so many innocents got killed."

Chasteen, almost 92, was in the Field Artillery - "big guns on wheels." He was in college in Colorado when he heard on the radio that Pearl Harbor had been hit.

"I didn't believe it at first," he said. Since he was already in ROTC, he was ready for active service.

"We had to go through with it," he said of America's joining the war. "We had to do it. We did what we were told to do and felt good about it." Sadly, the Loveland, Colo., neighbor who lived next door to his family was killed on the USS Arizona in the Pearl Harbor attack.

Chasteen was involved in the Battle of the Bulge, supporting the infantry that followed Gen. George Patton's push to the front. What sticks in his mind is liberating displaced persons in German camps. "The conditions were terrible," he said.

Brenner, who served as a T4 in the Third Army formed mostly under Patton for the invasion and liberation of France, grew up outside of Chicago and laughed that he was nicknamed "Chicago Gangster" because his weaponry resembled the mob's.

"We had light tanks, Jeeps and artillery," he recalled, explaining that units such as his had become light armor in 1942, with their horses taken away from them. But, he said he and the men he served with took great delight in taking the Germans' horses away from them in a skirmish on the French side of the Moselle River.

He was driving a truck, making 35 cents an hour and getting ready to go to college, when the Japanese attacked Pearl Harbor.

Mazzara, 89, rose to staff sergeant in the Army Air Corps during his World War II duty.

When he heard the news of Pearl Harbor, he was with high school friends on the way to see a movie.

"Where is Pearl Harbor?" they thought. "We had never heard of Pearl Harbor," he said. Seven months later, when he graduated from high school, he enlisted in the Army Air Corps.

"I wanted to kill" the enemy, he said. "That's the way we all felt." Mazzara served as a B-25 turret gunner.

The four in the car headed for the movies that Dec. 7 were "all upset and wanted to fight right now. I was just a kid, and when you're that young, nothing can harm you. You're infallible."

Chadderdon, 91, was helping build fighter planes in a defense plant in his New York hometown the day of the Pearl Harbor attack.

"I quit my job and joined the Air Corps," he said. He became a 2nd lieutenant pilot and wound up flying B-17s and B-25s, which were then called the "widow-makers," because they were hot planes, touchy to fly and crashed a lot.

"I went in a boy and came out a man," Chadderdon said.