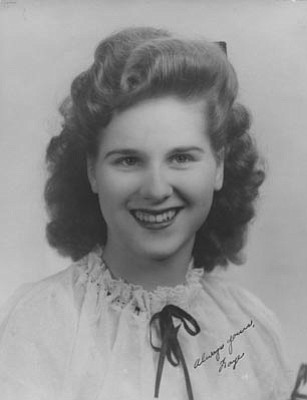 Faye Louise Marshall (née Elder) passed away on Wednesday, Dec. 4, 2013, at her home in Prescott Valley, Ariz., surrounded by her husband, daughters and sons-in-law. She was 86 years old.

Faye was born in Lebanon, Mo., in 1927 to Edna and Ralph Elder. Faye was married to Peter B. Marshall of Long Lane, Mo., for 67 years. They met on a blind date in November 1945, just a few months after Peter had been liberated from a POW camp in Japan. It was love at first sight. They were engaged for two weeks and married on March 17, 1946, at the Methodist church in Lebanon. In 1948, they moved to Phoenix, Ariz., where they raised their two daughters, Cynthia and Beverly.

Faye's grandmother, Ida Belle Elder of Lebanon, helped raise her after Faye's mother died. When Ida became too frail to live alone in later years, Faye brought her grandmother into her home and cared for her for the last six years of her life.

Faye worked as a secretary at State Farm Insurance for many years. After she and Pete retired, they moved to northern Arizona and have resided in Prescott Valley for the last 20 years.

Faye is survived by her husband; two daughters and their husbands, Cynthia and Tom Hopkins, and Beverly and Clark Doyle; two grandchildren and their spouses, Erin and Alex Adams, and Keith and Kate Coffee; and five great-grandchildren, Samantha Choy, David Choy, Caitlin Choy, Lillian Coffee and James Coffee.

She was a loving and beloved wife, mother, grandmother and nana to her family.

Burial will be at the Veterans Memorial Cemetery in Cave Creek, Ariz., on Tuesday, Dec. 10, 2013. In lieu of flowers, the family requests donations in her name to the Boys and Girls Club of Yavapai County, Ariz.