Reader's Theater play lightens up stress of the holidays with 'Shtick' 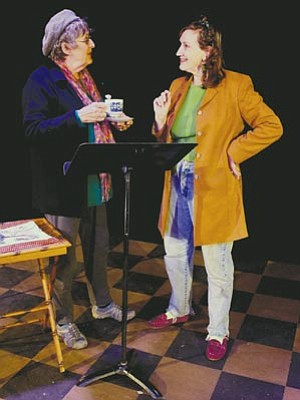 The holidays are supposed to be the happiest time of year, right?

Well, not necessarily for everyone, as the audience will see in Prescott Center for the Arts production of "Shtick," which opens tonight and runs through Dec. 7 at Stage Too.

The Reader's Theater performance veers a bit from what is traditional in such presentations, because the three actors will be in costume and add a bit of action to the adult comedy as well, director Mary Timpany said. Customarily, reader's theater actors dress in black and stand in front of podiums and read from open books.

Murray is a traveling comedian, and when he has a stroke, his wife "is in for a couple of surprises," Timpany said.

"You think you've had it bad this holiday season?" Timpany said. "Long-suffering Helen has put up with her comedian husband's frequent absences as he takes his act on the road. But Murray's sudden stroke brings on a whole new set of dilemmas for Helen to endure. Add to the mix her spacy sister Gladys and you have the makings of . well, shtick."

"Shtick" shows at 7 p.m. tonight, Friday and Saturday at Stage Too. It will play at 1 p.m. Saturday, Dec. 7, at the Pres-cott Valley Public Library, and at 3 p.m. Sunday, Dec. 8, at the Chino Valley Adult Center. Admission is free but a $5 donation is welcome.

This is Graham's "second theater adventure, and I am enjoying working with a new cast and learning some new things about theater," she said. "My character has been hit with a double whammy by her sister and her husband. Helen has a lot of spunk, so she has plenty to say to both of them. You'll have to come to the play to see how this all turns out."

Of his character, deLong said, "Shtick is what comedians do to stay alive. I have been doing shtick all my life; now I'm doing 'Shtick.' This play makes shtick sound easy, especially after lots of rehearsals."

Gratian's role is a "departure" from the other characters she has played, she said. "I have loved every minute. I wear some wonderful outfits, and I, too, get to do some fun shtick. Usually, I am singing, and I guess you could say I sing in this one, too. But that is all I'll say. I don't want to give away the plot."

Stage Too is located off the alley behind the businesses at the north end of Cortez Street near the Peregrine Book Company. For ticket information, call 445-3286 or visit pca-az.net.