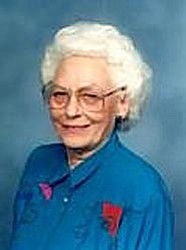 Martha Louise Mavity, 90, of Prescott Valley, Ariz., beloved mother, grandmother, great-grandmother and sister, entered the Kingdom of God on Nov. 27, 2013, at 10:19 p.m. Martha passed peacefully and comfortably in her home of natural causes with her family at her side.

Martha was born in Golden, Colo., on Oct. 25, 1923, to Gustav and Anne Kilman. She had three sisters, Virginia, Dorothy and Carol. Martha was married to the late Robert A. Mavity, an honored career Air Force pilot, on Jan. 14, 1943, in Santa Barbara, Calif.

Martha was an active member of the Rialto, Calif., Tri-Star Chapter 211, Order of the Eastern Star, for over 50 years and a resident of Prescott Valley since 1981.

Martha is survived by her three children, Roberta L. Salgado, 68, of Prescott Valley, David C. Mavity, 64, and his wife Diane E. Young-Mavity of Highland, Calif., and Jacklyne A. Mavity-Read, 53, and her husband Joseph A. Read of Prescott Valley.