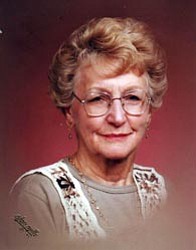 Susan May Andrus, 92, of Prescott, Ariz., passed away peacefully at 12:50 a.m. Friday, Nov. 22, 2013, shortly after a stroke from which she would never recover, according to medical professionals who attended her. She died at the Marley House with the care of hospice and her loving husband, Ernest Andrus. Susan also had close friends at the High Gate Retirement Home who loved and cared for her, especially during her time of passing.

Susan was born on Aug. 13, 1921, in Beiseker, Alberta, Canada, to Fred and Rosa Lang, and had 10 siblings, including eight sisters and two brothers. After graduating high school, she married Charles Suelzle and had three children. When she left Charles to come to the United States, she worked in the restaurant industry and achieved her citizenship. She lived with her second husband Reynolds and their son Rodney in Florida until the couple's separation. After that, Susan and Rodney moved to Los Angeles, Calif., where she met and married Frank Fordyce. There she and Frank raised her son and his daughter, Joyce Fordyce. She and her new family lived in various places throughout the United States. After Frank passed away, Susan moved to Prescott, Ariz., to be near her younger sister, Laverne Walkden. They were very close. It was here in Prescott that she met Ernest Andrus. They married on a Landing Ship Tank (LST) in Mobile, Ala., and lived more than 10 fulfilling years together.

Susan is survived by her husband Ernest Andrus; her children Lonie, Judy, Sandra, Rodney and Joyce; and sisters Mable, Pearl and Laverne. She leaves behind seven grandchildren and many great-grandchildren.

We would like to thank the Hospice staff at the Marley House and Susan's support team from High Gate Retirement Home for all their help and comfort.