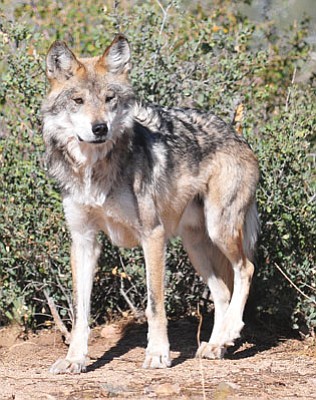 Les Stukenberg/The Daily Courier<br> Tasai, one of the two Mexican gray wolves at the Heritage Park Zoological Sanctuary in Prescott.

The U.S. Fish and Wildlife Service is proposing to allow endangered Mexican gray wolves to roam throughout more of Arizona and New Mexico, including Yavapai County, so they have enough room to thrive in the wilds.

"There's a benefit to restoring a complex assembly of species on the landscape," said Sherry Barrett, Mexican gray wolf recovery coordinator for the U.S. Fish and Wildlife Service. "Wolves are a unique part of the landscape, and it's important we restore the full assembly of wildlife back to the ecosystem."

The federal proposal would keep the Mexican gray wolf's designation as "non-essential experimental" so ranchers and wildlife officials could continue to kill them for killing livestock or trap them for roaming outside their designated range.

While the federal proposal would list the Mexican gray wolf as an endangered subspecies, it also would remove the other gray wolves from the list of endangered species.

The last public hearing on the initial proposals takes place today in Pinetop, the only such hearing in Arizona.

As livestock populations increased in Arizona and people wiped out the native elk, wolves started eating more livestock and people killed them off, too. Most wolves were extirpated from Arizona by the 1950s and the last known wolf was killed here in 1970.

After a recovery plan was completed in 1982, the first Mexican gray wolves were reintroduced into the Southwest in 1998. Now approximately 75 are roaming the wilds, with only three breeding pairs. At least 37 wolves have been shot and 12 have been hit by vehicles, the Arizona Game and Fish Department estimated.

The wolves can't become self-sustaining in the Blue Range Recovery Area because only about 6,000 acres includes its historical range and wolves already inhabit about 4,500 acres there, Barrett said.

The agency's 1982 goal of 100 wolves in the wild was just an initial goal, Barrett added.

"We know 100 is not a viable, sustainable population," she said. So Fish and wildlife is embarking on a new recovery plan.

The recovery program has plenty more wolves available; about 300 wolves are being held captive in 52 facilities, including the Heritage Park Zoological Sanctuary right here in Prescott.

The Fish and Wildlife Service is starting work on a detailed study about the potential impacts of the territory expansion, including impacts on hunting, tourism and livestock, Barrett said.

After it releases a draft study and plan as early as early 2014, it will conduct another round of public hearings on the draft before finalizing a revised plan.

The Yavapai County Board of Supervisors voted unanimously in August against the wolf territory expansion.

The board's only background information for the meeting was a 23-page document that staff found online. It's called "Mexican Wolf Recovery: Collateral Damage Identification." It features numerous graphic images of partially eaten cows, dogs and cats. The forward by the unnamed authors states that "wolves are destroying family rancher's (sic) ability to survive."

Warning readers that "habituated wolves come to your home and in your front yard where your children play," the document concludes "There is only one positive cure for problem wolves and that is to remove them... period."

"Are we willing to let the wolves take over here like they did in Montana, Wyoming and Minnesota to the point where the deprivation to the natural species of moose and elk, which we depend upon for our hunting population and the tourists that we bring into the state, gets out of hand?" Supervisor Craig Brown asked. "In those three states it is out of hand to the point where they are shooting (wolves) on sight."

Researchers thought wolves would focus more on deer in Arizona, but it turns out that 80 percent of their diet has been elk, Barrett said. The wolves have not reduced the overall elk population so far, she said.

"The report omits the value the wolves provide to the environment," Hess said. "If they return to healthy numbers, the wolf population strengthen the environment by keeping deer, elk and javelina populations healthy and in check. The wolves prey upon the old, sick and young and prevent those populations from growing so numerous that they overgraze and destroy the habitat that countless other species depend upon. And those other species include us."

Studies in Yellowstone have shown a resurgence in grizzlies, butterflies and other species that depend upon aspen and riparian plants that elk overgrazed before the return of wolves.

Prescott-area resident Jim Behnke attended the recent Mexican wolf public hearing in Albuquerque. He traveled to wolf country last month while helping to produce a new movie about them called "Lobos" that is set for a 2014 release, and he talked to state and federal officials involved in the wolf recovery program.

"I'm not an activist, I'm just an interested party," he said.

He supports expansion of the wolf's range.

"The health of wild game populations is maintained by having natural and balanced predation," said Behnke, who noted he is a hunter. "Balanced habitat is best for our world."

But he wants all voices to be heard, including that of the rancher who sat next to him at the public hearing.

"Many rural folk feel excluded from the U.S. Fish and Wildlife Service process," he said.

He hopes the new documentary helps everyone understand each other better, as well as the wolves.