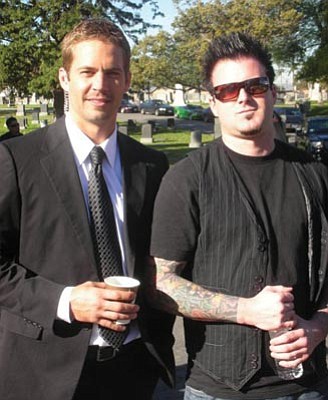 The late actor Paul Walker, who died in a fiery crash Saturday, was part of the fast car scene but not the Hollywood culture, according to a Dewey man who worked with him on the set of “Fast & Furious 4.”<br> Courtesy photo

PRESCOTT VALLEY - Actor Paul Walker, who died in a fiery crash Saturday, lived the fast life with cars but not the Hollywood culture, a Dewey man who worked with him on "Fast & Furious 4" said.

Walker, who starred in all but one of the six action blockbusters and died at age 40, "shied away from Hollywood conversations," Sean Tessman said. "He would talk about real stuff."

Walker was a passenger in a Porsche that crashed into a light pole and tree in Valencia, Calif. The accident, which remained under investigation Sunday, also claimed the life of his financial adviser, Roger Rodas, Walker's publicist said.

Tessman recalls Walker asked him and others on the set of "Fast & Furious 4" about their own lives. Tessman successfully auditioned an aftermarket (custom) Pontiac Solstice that appeared in a funeral scene in the movie.

Tessman, 32, appeared in a cameo role as well during the scene.

Tessman said he spent three days on the set of the movie, which was released in 2009.

Referring to Walker, Tessman said, "He did his normal acting thing. He was always super humble."

He said he and Walker tossed a football on the set, adding Walker invited him inside Walker's celebrity trailer for a beer and to play Grand Theft Auto videogames.

Tessman and his father, Roger, of Prescott Valley own Custom Auto Design, in which Roger renders aftermarket designs for cars for General Motors and other manufacturers on his computer screen.

The Tessmans landed the Pontiac Solstice in "Fast & Furious 4" after a Los Angeles casting agency invited them to take the vehicle to Paramount Studios.

About 2,500 cars showed up on a single studio lot, Sean said.

"We were fighting for a position in the movie," he said.

Tessman said Walker and director Justin Lin dropped by the Pontiac, adding Walker "immediately recognized" him from their days as surfers. He said he had not seen Walker in four years.

Tessman, who grew up in Huntington Beach, Calif., said he first met Walker about 20 years ago when they were both part of the surfing scene.

"Before he was a big, famous guy, he was a great surfer," Tessman said. "He always had modified streetcars," also known as "tuners."

Tessman said he last saw Walker during a private New Year's Eve party at a nightclub in Las Vegas in 2010. Other celebrities in attendance included Paris Hilton and rap singer 50 Cent.

Tessman, who works in marketing for SimonMed in Prescott Valley, acknowledged some moviegoers consider the "Fast & Furious" franchise to be "cheesy."

However, "Fast & Furious" inspired him and other auto enthusiasts.

"And it has definitely inspired us to come up with a tribute project (to Walker)," Tessman said.