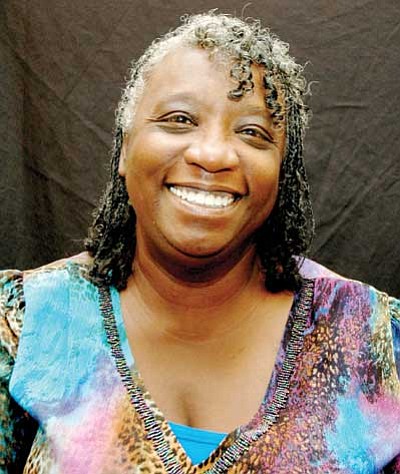 Stephanie Jefferson just released her second novel, Weight of the Crown, in her Princess Kandake series for 'tween readers. She will read from her new work and sign books at noon Saturday at the Peregrine Bookstore in Prescott.

Jefferson, a Prescott Valley resident for the past two years, writes fiction for middle grade children. She wrote Princess Kandake in response to her 3-year-old granddaughter's observation of the lack of African-American princesses in popular - specifically, Disney - culture.

"My granddaughter was looking at a Disney ad and asked, 'Where are all the beautiful brown princesses?' So my daughter and I researched and looked up every brown princess we could find," Jefferson said.

They found one in ancient history in the kingdom of Nubia, a region found in present day Sudan that shared a border with Egypt and Ethiopia. Jefferson said Nubia had the greatest number of ruling queens in history. They ruled in their own right, not as an only child in succession to the throne or married to a husband king that died. The queen ruled because of her strength, she said.

"The problem for me - all princesses have this catch, which I cannot tolerate - you wait for the prince or the kingdom or something to come and rescue you. You have no power in and of yourself to determine what's for you and your life."

She found most of the information on Kandakes, warrior queens or great women, was in Greek, Roman and Egyptian history. In 24 B.C., Jefferson said, the Kandake leader and her warriors beat back the Romans several times.

The Kandakes met the Roman Army at the border, and beat them all the way back to Egypt. They took one of the statue heads and buried it in the doorway of a public building in Nubia, so the citizens would trample the head of Augustus Ceasar every day.

Her books' message for young girls in particular is that they have the power to decide what they want in life, they just have to be willing to do the work.

Also reading and signing books is Chino Valley author Gene Twaronite, who has just published his short story collection Dragon Daily News: Stories of Imagination for Children of All Ages.

Twaronite builds his wacky and weird tales from scratch out of the detritus and figments of his brain. Despite this, his tales are still totally believable.

He is also the author of two other humorous books, the middle grade novel The Family That Wasn't and the young adult novel My Vacation in Hell.