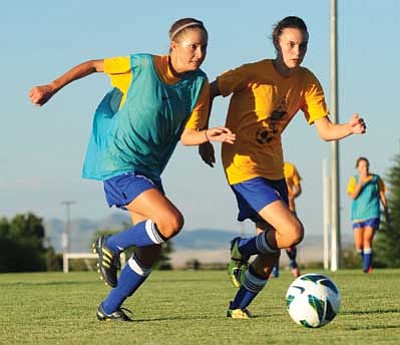 PRESCOTT - The academic buildings at Embry-Riddle Aeronautical University won't be the only ones bustling with activity this fall. ERAU's athletic facilities are about to get much busier.

The National Association of Intercollegiate Athletics (NAIA) Eagles will field seven teams this autumn thanks to the addition of their men's and women's cross-country programs. Those squads will compete in their inaugural runs Sept. 7 at the George Kyte Classic in Flagstaff.

It's a thrilling time not only for first-year Embry-Riddle cross country coach Chris Bray, but the entire athletic department as well as the prestigious aviation and aerospace university's nearly 1,700-member student body.

"In a word, it's been positive," Bray said of the ERAU athletic department's growth, which will include a new women's softball program next spring. "It's great that we are expanding, and that's driven from the top (of the university's administration) down."

Embry-Riddle, located at 3700 Willow Creek Road in north Prescott, and the school's fall teams are inching closer to opening their respective seasons.

The Eagles' volleyball squad kicks off the action at 6:30 p.m. Friday, Aug. 30, when it locks horns with Arizona Christian at ERAU's Activity Center.

Women's soccer follows with its campaign opener at 6 p.m. Saturday, Aug. 31, when it welcomes in The Master's College (Calif.) at the Embry-Riddle field.

Men's soccer, under the guidance of new coach Adam Pearce, will conduct its opener at 7 p.m. Sept. 4, at home against California Pacific Conference opponent Simpson (Calif.).

Men's and women's golf will follow on Sept. 7, when they host Arizona Christian at Prescott's Talking Rock Golf Club. Tee time is at noon.

Over the past year, Bray has been piecing together both the Eagles men's and women's cross country rosters.

On the men's side, Bray recruited nine freshmen who will vie for the team's seven roster spots, although several additional runners on campus have shown an interest in the program.

Former Prescott High star Vincent Arminio, who graduated from PHS earlier this year, plans to run for the Eagles as a freshman. Other incoming freshman harriers include Austin Galeazzo of Anthem, Blake Bradford of Goodyear, Kyle Miller of Tulare, Calif., Colter Merritt of Park City, Utah, and Andrew Petersen and Vincent Morin, both of whom hail from northern California.

On the women's side, at least five freshmen should run for Bray. They include Lisa Garside of Riverside, Calif., Sarah Lykins of Buckeye, Bailey Riddle of Peoria, Kayla McLaughlin of Lancaster, Calif., and Abigail Christensen of Clements, Calif.

Bray said he will conduct a time trial Saturday, Aug. 31, to determine the rosters for both teams, which are Cal Pac members and will have a shot at qualifying for the NAIA National Championships in late November.

"In our first year, I expect us to do well because we've got good athletes coming in," Bray said. "But they're young athletes, so I'm not putting the pressure on them that they have to perform."

Bray coached cross country for four years at Yavapai College as either a head coach or an assistant coach for his wife, Cylinda Bray. The Roughriders qualified for the Junior College National Championships in each one of his four campaigns (1997-2000), claiming top 10 national finishes each time.

By the mid-2000s, Yavapai College cut cross country and Chris moved on to work in commercial lending until he landed the Embry-Riddle job last year.

He said that adding the cross country program at ERAU will benefit the university in the long run. The campus has its own cross country course, although the Eagles runners will practice at other spots in the city.

"From the cross country standpoint, there's a certain segment of students that hadn't come here (to ERAU) in the past because they wanted to continue on (with running)," Bray said. "It's an opportunity for those kids to continue on with what they're passionate about."

In 2013, ERAU volleyball hopes to build on a successful 2012 campaign with energetic second-year coach Jill Blasczyk in the fold.

ERAU graduated five of its nine players from 2012 in the off-season. However, the Eagles return four on their 11-player roster for 2013, including All-Conference senior setter/outside hitter Morgan Vieira (5-foot-10) of Las Vegas and junior opposite hitter Jessica DeOcampo (5-11) of Marina, Calif.

Blasczyk said that while she's focused on her team putting itself in position to win the Cal Pac title this fall, she's mindful of what's transpiring around her at ERAU.

"Being part of anything that's growing on campus is exciting," she said. "The coaches are motivated and we're all knowledgeable in our sports. We all like to win and we want to succeed. That's a priority."

Sixth-year women's soccer coach Todd Poitras brings back 16 lettermen from his 2012 club - one that compiled a 13-5-3 record and finished ranked 27th in the nation - in hopes of making a push for another league crown. Late this fall, Embry-Riddle will host the conference tournament. "Overall, these are exciting times here," said Poitras, who easily recalls the days when ERAU offered only intercollegiate volleyball, wrestling and soccer. "To see how far we've come and to see how far this department has grown is obviously a thrill. It's neat to watch all of it come to fruition because it's been talked about for so long."

Last season, the Embry-Riddle men registered a 23-11-6 record and concluded the campaign ranked 16th in the NAIA national poll.

In addition, the Eagles' men's and women's golf teams are planning to gain momentum from their solid finishes this past spring.

At the end of May, the Cal Pac champion men's squad finished among the top 20 at the NAIA Men's Golf Championships in Salem, Ore. Entering only its third season of collegiate competition this fall, ERAU returns a sturdy corps of returnees, including four standout sophomores.

In April, the women's golfers finished fifth at the NAIA National Qualifying Tournament and ended the season ranked 36th nationally out of approximately 150 NAIA schools.

Five Eagles women, all promising underclassmen, will tee it up this fall, coach Kim Haddow said, in an attempt to move into the top 25 of the national rankings.

Haddow, too, is ecstatic about the athletics expansion at Embry-Riddle, which will likely add men's and women's basketball in the coming years.

"Athletics adds a tremendous aspect to the college experience," Haddow said. "Young people are going to be out to watch - and I hope the community comes out."