Lasers tackle everything from tattoo removals to neurosurgery 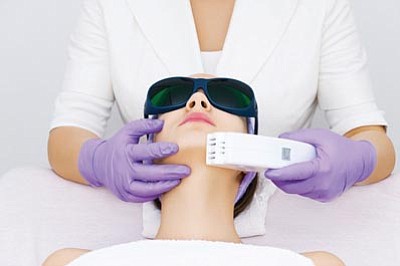 In the last decade, lasers in medicine have come from obscurity to the mainstream, and have found utility in many fields of medicine and surgery. From cosmetic dermatology to ophthalmology and surgery, lasers continue to make significant inroads in the treatment of disease, and have enabled more procedures to be performed in an office setting rather than the hospital. The following is a summary of how lasers are being used in medicine in 2013.

Laser hair removal is the most frequently requested cosmetic procedure in the United States, with more than 1 million performed each year. Permanent hair reduction can be seen with as few as six to eight treatments. With laser hair removal, patients find relief from ingrown hairs, folliculitis, and simply the daily chore of shaving. A typical session is painless, requiring no anesthesia, and can be performed in under 10 minutes, even for large areas such as the back.

Laser tattoo removal is readily available in most locales, and can remove most tattoos without scarring. The treatment is more expensive than the original tattoo, so people should be certain they wish to keep a tattoo before they get one applied. Black and darkly pigmented tattoos are the easiest to remove, whereas yellow or green colors may require specialized lasers only available in larger cities. Complete elimination of a tattoo may take a year or more; however, some people desire only that the original tattoo be lightened so a new overlay can be applied.

Laser rejuvenation is a low-cost alternative to facelift and, in addition to tightening and lifting skin, can improve fine wrinkling and remove age spots, toning the skin in the same treatment session. In addition, these procedures are fast and relatively painless, without the lengthy downtime of a surgical procedure, and are performed as outpatient procedures.

Rosacea or facial redness is easily treated with lasers in as few as three treatments. Dilated blood vessels on the face are most frequently caused by overexposure to the sun, alcohol or hormone therapy, so these should be curtailed to prevent recurrence.

Hair loss in both men and women is now being treated with laser therapy. Typically, the laser treatment takes about 20 minutes and is done three times a week, with modest hair regrowth noted in about six months. Keep in mind that this treatment works only if there are hair follicles present, so a completely bald scalp would not be expected to regrow hair.

Varicose vein treatments are now almost exclusively done with a laser procedure called EVLA, in which a laser fiber is introduced into the problem vein, sealing it closed without surgery. Patients can return to work the same day with minimal discomfort, and the procedure is covered by insurance including Medicare. Spider veins can also be treated with external lasers for cosmetic improvement.

In ophthalmology, lasers are used for retinal detachments, diabetic retinopathy, macular degeneration, cataracts and LASIK. Benefits of laser eye surgery are precision, decreased risk of bleeding and infection, and the ability to perform procedures on an outpatient basis.

Most surgical procedures can be performed with lasers, especially laparoscopic surgery such as bowel resection, gynecologic procedures, and gallbladder surgery. Hemorrhoidectomy and hernia repairs are also frequently done with lasers.

Urologic uses for lasers include laser lithotripsy, which is used to break up kidney stones, and transurethral prostatectomy, now being done with lasers to minimize blood loss and other side effects.

Finally, laser surgical treatments have been introduced in veterinary medicine for tumors, nail removal and orthopedic surgery to decrease the risk of infection and bleeding.

Laser facilities in Arizona must be certified by the Arizona Radiation Regulatory Agency, which provides basic safety standards including eye protection for patients and training standards of laser operators.

Robin Fleck, M.D., is a board-certified dermatologist and internist. She is founder and medical director of Vein Specialties and Body Oasis Medical Spa, and is the director of Southwest Skin and Cancer Institute. Send questions via www.rejuvadoc.com.