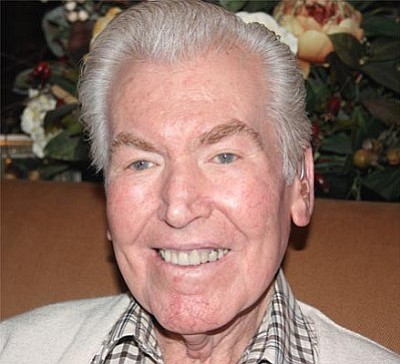 On Aug. 7, 2013, after 89 years on this earth, the Lord called James Howard Wilson home to be with Him. He passed peacefully in their home with his wife and children at his side. James was born in Omaha, Neb., on Oct. 28, 1923, to Andrew and Lillian Wilson.

James was the youngest of four brothers, Walter, Raymond and Robert, now all deceased. While serving in the Navy Seabees during World War II, James went roller-skating with his buddy. There, James met his wife, Harriet, and that was it for him. They fell in love and were married on March 29, 1945, at the Omaha Gospel Tabernacle. James worked for the Omaha Transit System until they moved to Phoenix in 1960, and worked for the City of Phoenix until he retired. They moved up to Prescott about five years ago to be closer to their daughter and, just a couple of years ago, moved to Las Fuentes Resort, where they have made many friends.

James was a kind and quiet man. He was a great son, husband and father, loving and devoted to his wife and family. James was proud of his children and loved being a father and grandpa. He loved the Lord with his whole heart and soul and wanted others to know the Lord too. James loved reading his Bible. He loved teaching his children about the Lord and prayed for his family faithfully each night. James loved to fish, travel in their RV, draw and paint or do fun things with his family.

James is survived by his wife of 69 years, Harriet.

James and Harriet have two children, Susan and Jim. Susan and her husband Larry reside in Prescott, Ariz. They have two daughters, Rachel, who lives in Seattle, Wash., and Kristen, who lives in Woodway, Texas. His son Jim and his wife Linda reside in Peoria, Ariz., and have five children, Daniel, Amy, Chris, Bethany and Dawn. Their children all reside in the Phoenix area, except for Amy, who lives in Houston, Texas. James has 12 great-grandchildren.