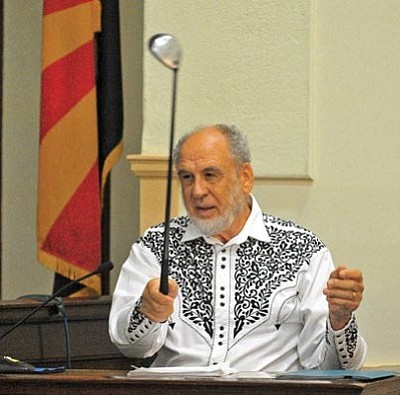 Matt Hinshaw/The Daily Courier<br>Dr. Philip Keene, former Yavapai County Medical Examiner, talks about the use of a golf club as a weapon while being cross-examined by the defense Thursday morning at the Yavapai County Courthouse.

PRESCOTT - Former Yavapai County Medical Examiner Dr. Philip Keene in court testimony on Thursday said that DNA found on a murder victim was the result of contamination from a previous autopsy he had just concluded, and admitted to the jury that he drove the victim's body to Phoenix in his pickup truck.

Keene was on the witness stand for the prosecution in the murder trial of Steven DeMocker, who is accused to bludgeoning to death his ex-wife, Carol Kennedy, in July 2008.

Keene, the county's medical examiner for 29 years, retired before the original 2010 DeMocker trial began, and is now a forensic consultant.

He told the jury that Kennedy had "at least nine" blows to the skull, some extremely violent.

Deputy County Attorney Steve Young asked him what kind of a weapon he thought had been used.

"The first object that came to my mind was a golf club," Keene said.

To help confirm that, he said, he wanted to have a forensic anthropologist in Phoenix examine Kennedy.

The day after the murder, "since I was going to the Valley anyway, I took the body in my (pickup) truck to the Maricopa County forensic science center," he said. He added that it was sealed in a body bag.

"In the open, in the back of your truck?" asked defense attorney Greg Parzych.

He did it himself, Keene said, to speed along the process for the family rather than making them to wait until the following week when it could be transported by a company that the county used for that purpose.

But the plan didn't work, because, Keene said, the facility wouldn't accept the entire body - they only wanted the head. He had the body brought back to Prescott, and a sheriff's deputy later delivered the head to the Maricopa County facility for examination.

In DeMocker's first trial, DNA evidence from another person was discovered under Kennedy's fingernails, but the source wasn't identified. In March 2011, the DNA was identified by the Arizona Department of Public Safety's crime lab as that of Ronald Birman, a 68-year-old Chino Valley man who died about the same time as Kennedy. Birman died after an arterial graft failed.

It was possible, Keene said, that her hand came into contact with "residual blood on the autopsy table," but not, he said, from fingernail clippers, which he said were cleaned between exams.

Keene also testified about the death of Jim Knapp, who had been living in Kennedy's guesthouse. He ruled it a suicide, saying Knapp had shot himself, but Parzych asked about photos that showed bullet holes in the windows of another room, a chair on a bed, upset coffee mugs, and a telephone on the floor.

"Did you consider the possibility that Mr. Knapp was shooting at an intruder?" Parzych asked.

"No," Keene replied. He said it was "an usual case" and that Knapp had been taking "all kinds of (prescription) drugs," but that he still believed it was suicide.

Also on the stand Thursday was YCSO Det. Ross Diskin, who talked about the search warrants served at DeMocker's home. In a photo from the first search, a golf club head cover is seen on a garage shelf; after detectives decided that a golf club could have been the weapon, they went back later that same day with a new warrant, and the cover was gone.

DeMocker has said it might have blown into his girlfriend's car, parked near the shelf, but Diskin said he searched the car and did not find it. YCSO ultimately retrieved the cover months later from John Sears, DeMocker's attorney at the time.

After being chastised by Superior Court Judge Gary E. Donahoe for taking too long in their witness examinations, the attorneys have picked up the pace so much that Paupore told Donahoe Thursday the prosecution now believes it will wrap up its case by Sept. 3. The defense would begin its case immediately, and could be done by the end of September. That's earlier than Donahoe expected when he set the trial's end date for Oct. 18.

In fact, now the lawyers need to stall a bit, because out-of-state witnesses won't be available early, so Donahoe is giving everyone the last two Fridays in August off.