The biggest villain in MLB's doping scandal is ... 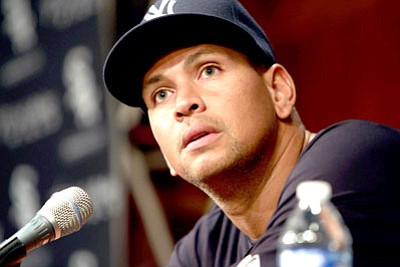 Charles Cherney/The Associated Press<br> Alex Rodriguez has a news conference before his Yankees play the White Sox in Chicago on Monday. He was suspended through 2014, and All-Stars Nelson Cruz, Jhonny Peralta and Everth Cabrera were banned 50 games apiece when Major League Baseball disciplined 13 players in a drug case, the most sweeping punishment since the Black Sox scandal nearly a century ago.

The biggest villain in MLB's doping scandal isn't who you think it is.

It's not Biogenesis. The Miami clinic that had emerged as the epicenter of performance enhancing drugs (PEDs), according to whistleblower Porter Fischer, and had been supplying pro athletes since 2009. And those athletes are not limited to MLB. Fischer says athletes from the NBA, NCAA, professional boxing, tennis and MMA have also been clients. (He adds that, to his knowledge, there were no clients from the NFL or NHL.) Biogenesis was the pusher, but no one made these players ingest PEDs but the players themselves.

It's not Barry Bonds. His name is already mud, no matter how talented the non-juiced Bonds was. No one with an ounce of baseball acumen regards Bonds as baseball's home run king. That title rests respectfully with Henry Aaron. Exhuming Bonds as PEDs' boogie man at this point is like booing championship belts changing hands in pro wrestling. A theatrical farce with no real substance.

It's not Ryan Braun. Braun was a latecomer to the party, and was a small fish by the time the big PED pond reeled him in. His FedEx alibi never measured up, and he ingloriously tried to rub everyone's face in his wrongful righteousness with boastful vindications. Until the truth caught up with him.

It's not even Alex Rodriguez. The three-time MVP and one-time challenger to Bonds for baseball's bogus home run kingdom was slapped with a 211-game suspension on Monday; the biggest punishment since Pete Rose's lifetime ban. A look at MLB's evidence shows that A-Rod did it, involved others, obstructed the investigation, and now wants to save what's left of his now infamous contract. (He stands to lose up to $33 million if his suspension - pending A-Rod's desperate appeal - lasts the full 211 games.) Rodriguez' standing in the PED legacy is mythical at this point, but he ain't the worst offender.

That distinction goes to, in baseball's own terms, a player to be named later.

There will be another failed drug test. We know this. MLB has been cracking down for years, and is on an almost Wyatt Earp-like vendetta to keep the posse coming. But these players who keep feeding from the PED trough - from A-Rod to Braun - are simply not the brightest bulbs in MLB's starry sky.

It's ego, it's denial, it's bad advice. It's amazing that players still - 15 years after Mark McGwire and Sammy Sosa's tainted summer chase of Roger Maris - try to buck the system to earn the biggest payday and enduring legacy that PEDs can buy.

Only, they don't get those things. Time and time again. Everyone in the PED fraternity sees their legacies end up in stadium urinals everywhere, and, in terms of money, the 13 suspended on Monday stand to lose a combined $35.5 million in salary in MLB's most sweeping punishment since the Black Sox scandal almost a century ago.

Nope. The biggest PED goat will be the huckleberry who gets popped next.

Column: Like it or not, A-Rod may never miss a day or a dollar
Column: A-Rod's 'win' against Selig won't hold up in the long run
Column: Bud's last stand against PEDs heating up
Alex Rodriquez: Please go away
Blog: The biggest villain in MLB's doping scandal is ...