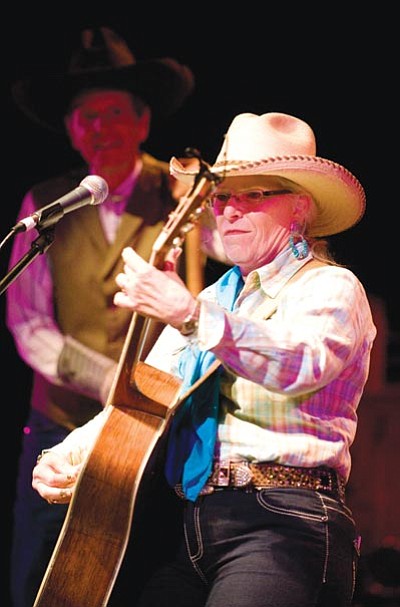 "Write 'em, Cowboy!" OK, maybe that's not what they meant in those Western movies you saw as a kid. But that's what they might be hollerin' when the 26th annual Arizona Cowboy Poets Gathering rolls into town Aug. 8-10. One of the longest-running cowboy poetry events in the West (where else?), this year's show is packed with the rock stars of the field and a local tradition that reaches back to Prescott's early days and local legend Gail Gardner. Over 50 performers in nine different venues will be recitin' and singin' their stories, songs and poems, all with a connection to life on a ranch.

Cowboy poetry grew out of a long tradition of cowpokes tending their herds at night: continuous talking or singing would keep them from startling their dozing cattle. And, yes, perhaps there was a need to relieve their own boredom; those were, after all, long repetitious days in the saddle. So early cowboy poets would make up stories and fit 'em to rhyme, stories about their everyday experience - branding cattle, riding and breaking horses, snakes and snake-oil salesmen, cacti and cliffs and canyons. One of the most famous poems was written by Prescott's own Gail Gardner - "Tyin' Knots In The Devil's Tail," which tells the story of meeting up with the Devil and coming out on top.

Most of the modern cowboy poets will tend to use music with some of their poems, usually a guitar, sometimes adding melody to turn it into a song. Some cowboy poems have been covered, and changed in the process, by famous singers. Early poet Curly Fletcher's best-known poem, Strawberry Roan, was shortened and recorded by Marty Robbins, Chris Ledoux, Pete Seeger, and many others. This year's event has two bands on the bill, The Rusty Pistols and The Broken Chair Band.

The upcoming Prescott gathering, which will take place at Yavapai College, has some real stars of the genre lined up to perform, names like Baxter Black, Dave Stamey, Gail Steiger (grandson of Gail Gardner), and Belinda Gail. Yes, to answer your question: there are plenty of women writing and performing cowboy poetry, and it's not a recent change - they've been there for decades.

So, what makes a "cowboy poem?" Are there rules that define cowboy poetry? I asked Jim Dunham, one of the organizers of the event and a poet himself. "It's gotta be about cowboys, ranching, cattle, and the West - it's gotta be about ranch life," Dunham says. Cowboy poetry can even be broken down into categories, he says. "Sure - there's humor, and horses, herding cattle, and the life of a cowboy. But it's always good, family entertainment." What about gunslingers? says I. "Yep, there are poems about that, too."

Dunham also explained to me the hierarchy of the poets for the Prescott Gathering. The three night shows have the "featured performers," and these are poets who were raised and worked on ranches at some point. The other performers selected for the Gathering would also have some ranching background. According to Mary Matli, another of this year's poets, it wouldn't take long for an authentic cowboy poet to recognize a poser, someone who had no knowledge of ranching. Dunham himself was raised on a ranch near Wickenburg, and has written some poems. "I don't force it - I just wait for inspiration," he says. He adds that some of the performers write their own, and some recite the classics.

Some of the poets have enjoyed their moment in the spotlight too - Baxter Black, one of this year's headliners and possibly the best-known current poet, has been on the Tonight Show and is a regular commentator on NPR. Belinda Gail, another featured performer with the handle "America's Western Sweetheart," has received numerous awards for her music and poetry.

On a personal note: my father, Red Cheek, singer, guitarist, and nonstop storyteller, wrote a Christmas poem every year to send out to family and friends. It was usually in the vernacular of the cowboy poets, often about a cowpoke or a herd of cattle or the desert at night. I can't help thinking he'd fit right in with this crowd of cowboy poets coming to town, and you can be sure he'd be there for the Gathering, in the crowd if he wasn't on the stage. If you go, keep an eye out for his ghost.

For more info, check out www.azcowboypoets.org/index.html.

Don Cheek is a local singer/songwriter who narrowly escaped from the seventh verse of a cowboy poem at the age of 12. Send feedback to cheekstr @cableone.net, or check his band's website, www.cheektones.com.