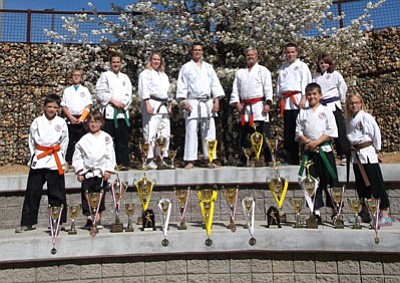 Held annually in Albuquerque, N.M., the top four State and Regional qualifiers from the U.S. are invited to the Nationals to compete for a National Champion ranking.

ShinPu-Ren Family Karate attended with nine students and two instructors to compete in this year's tournament. Competition is two long days of events and runoffs that last late into Saturday evening until all of the champion titles have been awarded.

Each year students hold a Kick-a-Thon to raise the sponsorship money for entry fees, and with each Kick-a-Thon they donate a percentage of the money raised to a local Prescott Valley charitable organization.

This year the students were able to do better than the usual 10 percent donation, and they gave 65 percent of the proceeds to help out where they felt the money could do the most good.