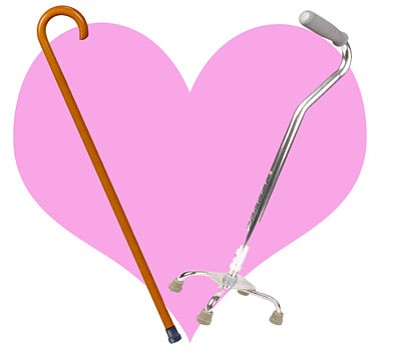 "Advanced Chemistry," a pair of one-act comedies that explore love, lust and longevity among the senior crowd, will elicit both laughter and tears, director Mary Timpany said of the Prescott Center for the Arts Reader's Theater production that opens tonight.

The curtain goes up at 7 p.m. and continues at the same time Friday and Saturday in the Pueblo Room of the Smoki Museum, 147 N. Arizona Ave. The cast will also perform matinees at 1 p.m. on Saturday at the Chino Valley Adult Center and May 4 at the Prescott Valley Public Library. The suggested donation for the shows is $5.

"Expect to laugh, yes, but there are some very poignant parts about love the second time around," Timpany said. "I never fail to get teary at several scenes. The playwright, Rich Orloff, has an ear for what seniors are going through when they lose their spouse and contemplate their future."

"This has been a wonderful opportunity for our senior actors to have some great roles to sink their teeth into," Timpany said. "Whether it's Hollywood or Prescott, we are always on the lookout for roles for our more mature actors. This play fits the bill perfectly."

In Reader's Theater productions, the actors read the script directly, standing in front of music stands. But, that doesn't absolve them from acting as they would in a stage play. Through their facial expressions, gestures and voice, they provide an entertaining theatrical experience, Timpany said.

"Think of how we love to read to our children and grandchildren and how they enjoy it. None of the drama and character are lost just because we don't have our show on the main stage with elaborate scenery, costumes and a lighting plot."

Many of the cast members have been in other shows, but one, in particular, Reina Yoss, is making her debut with Prescott Center for the Arts.

"I'm so thrilled," she said. "I've been working back stage, and then I took a few acting classes. This is great, as I don't have to worry about remembering my lines and blocking, yet I can sink my teeth into a character. I'm really getting a full theater experience, and I am surrounded by experienced actors I can learn from. Everyone has been supportive of my efforts. I'm having a great time."

Two other actors, Woods and Bosworth, recently appeared in the Young Playwrights Festival.

"This is certainly bawdier than the play I was last in," Woods said. "But I think it's done tastefully and never puts down seniors as some humor does.

Bosworth agreed. "Some senior humor makes fun of seniors, but the dialogue here, while maybe a bit risqué, moves the plot along and supports the characterizations logically. I play a granddaughter, and I can feel a realistic connection with the other characters."

For more information, call the Prescott Center for the Arts at 445-3286.