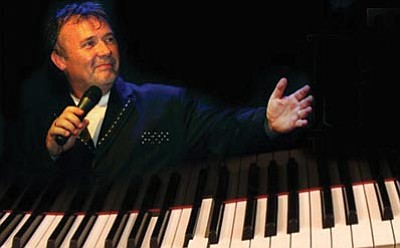 Terry Davies, "The Piano Man," a devotee of Elton John and Billy Joel, will bring as much of their music as he can to the Elks Opera House in a tribute to the legendary superstars Saturday night.

Davies, 46, a native Brit who now lives in Anthem, has been comfortable on a piano bench from the time he was 3 years old.

"My father taught me to play, and I followed his footsteps ever since," he said, adding he once played the euphonium in England's Royal Air Force but hasn't touched that instrument since he was 18. "You'll get me, my voice and the piano in Prescott," he said of Saturday's performance

Of all the many songwriters of the 1970s and '80s who gained stardom, Joel and John rise to the top as Davies' inspirations. They are stars, he said, "because the timing was so important. Between them, they had over 500 songs that were recorded on albums or singles. They are both such amazing songwriters and their music inspires me. Billy Joel, in particular, blends his lyrics and music like no one else.

"Although I don't impersonate them, I can get quite close to them vocally. That and the fact that I love their music is why we perform a show in tribute to them."

Davies, at the piano, will strike up his eight-piece band, with two backing vocalists, at 7:30 p.m. Tickets range from $22 to $25. Call the Elks Opera House box office today from 10 a.m. to 2 p.m. or log onto www.elksoperahouse.com to buy tickets, which will also be available at the door one hour before show time.

People who saw Davies' "The Piano Man" show at the Elks this past year will enjoy an all-new show Saturday, he said - although, he adds, "You couldn't do a Billy Joel/Elton John show without performing all the favorites like 'Candle in the Wind,' 'Your Song,' 'We Didn't Start the Fire' and, of course, 'The Piano Man,'" Davies said.

Davies originally performed the show as "The Piano Men," because there are two of them - Joel and John.

"Audiences started to call me 'The Piano Man' and it stuck from there," he said.

Davies enjoys performing at the Elks Opera House, calling it "one of the best theaters I have ever had the pleasure to experience." And, he says, not all pianos in venues where he performs are the same high quality.

"Sometimes the pianos are awful and sometimes not even in tune," he said. "We do carry our own piano for times like that and sometimes we will rent a Steinway or Yamaha if we are in the bigger cities. The best piano I ever played was a Bosendorfer at the London Palladium ... it was a dream to play."

But, he said, "The piano at the Elks Opera House is beautiful, so I love playing that one."

"The bottom line is that this show is a labor of love. My heart and soul go into every note. I also believe that the show is as much about me and my life as well as Billy and Elton.

"I like to think that audiences leave with memories that last a lifetime. This is a show that gives you so much more than just the songs. It gives you the story behind the songs by performers who really put everything into their performance."