Chew on this: Bill's Pizza thrives on decades of experience 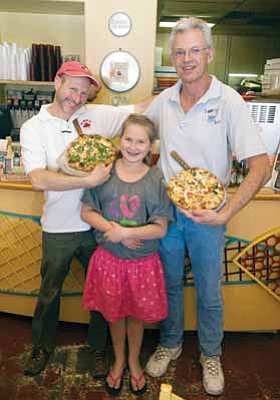 PRESCOTT - Bill Tracy, owner of Bill's Pizza, said he grew up in San Jose, Calif., where he first tried a pizza crust baked with sourdough in the 1980s.

"That was the best pizza I ever had," Tracy said. "It gives it more flavor. It's not just white bread. The sourdough gives it a better texture and crispiness."

Tracy graduated from the Western Culinary School in Portland in 1984, and has been in the field since then. He owned the Dinner Bell in downtown Prescott from 1999 to 2004.

Tracy said he sold the restaurant to "take a break," then headed to Oaxaca, Mexico, to teach for three months at Seasons of My Heart under the tutelage of acclaimed chef Susanna Trilling.

Afterward, he spent three years in Thailand, where he graduated 18 months ago from the Wandee Culinary School in Bangkok. Upon returning to Prescott, Tracy said he had plans to buy a Thai restaurant. When that fell through, he opened Bill's Grill in December 2010 on South Montezuma Street.

He said he has wanted to open a pizzeria since the 1970s, and traveled around Italy tasting pizzas.

Sobo, a 30-year veteran of the restaurant industry, started as general manager in January, and oversees Bill's Pizza and Bill's Grill.

"Those are oils your doctor tells you to use," Sobo said.

He said Bill's Pizza imports flour from Italy, and buys Schreiner's sausage from Phoenix. The sausages are hot, Sicilian (with fennel seed) and sweet.

Sobo and Tracy noted the honors Bill's Pizza has received. Popular Plates named Bill's Pizza in the top 100 of pizzerias nationwide in winter 2010.

Customers at Bill's Pizza may select from a variety of pizzas, salads and pizza combos, and order soft drinks and beer.

Prices start at $2.25 for a slice of cheese pizza and $3 for a small house salad. Customers may order 10-inch individual pizzas, starting at $6.50 and peaking at $9.50 with as many as seven toppings.

Eighteen-inch pizzas start at $16 with just cheese, and max at $21 with as many as seven toppings.

Bill's features 24 combo pizzas ranging from $9.50 for 10 inches and $21 for most 18-inch pies. Some are named for famous people, including The Charlie Sheen, John Henry and Elton John.

"It surprises me, being a vegetarian pizza," Tracy said.