Reagan stops by Yavapai elections office to talk about bills 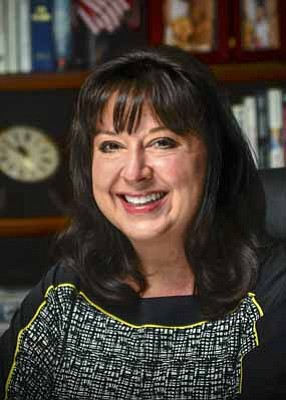 Reagan is traveling to county seats across the state to update elections officials about the bills, and she stopped by the Yavapai County Recorder's Office on Friday first.

"She reached out from the very beginning," Yavapai County Recorder Leslie Hoffman said.

"They gave me a lot of suggestions, and we made a lot of them into bills," Reagan said.

Some of Reagan's bills, such as Senate Bill 1261, have attracted criticism from people who say they disenfranchise voters. SB 1261 purges names from permanent early voter lists when people don't use their early ballots in both the primary and general elections during two consecutive elections for federal offices. Recorder's offices have to send a letter to the voter first.

Reagan said she's not trying to prevent anyone from voting.

"Our goal is very basic, and that was to do what's best for voters," Reagan said. A two-week delay in election outcomes was the catalyst to improve the process. Although it took about that long to count all the ballots in some previous elections, several tight races last year couldn't be decided until the counting was done so the delay received more publicity.

Reagan cited three major elections bills that all remain alive in the legislative process, although bill hearings have slowed to a standstill at the request of Gov. Jan Brewer, while she works to get legislative support for her Medicaid expansion plan.

Senate Bill 1003 prevents people from collecting mail-in ballots and dropping them off at polling places without the voter and ballot collector signing the affidavit on the ballot. It prohibits groups from collecting ballots. Violations are a Class 6 felony.

"Our system is not set up for you to bring in 1,000 ballots at once," Reagan said. County elections officials might not be able to process them all before Election Day, and therefore confirm they're turned in when people who received early ballots are trying to vote at the polls, she added.

No other state lets people pick up unlimited numbers of ballots from others, Reagan said.

"It just shouldn't be allowed," she said. "Voting isn't a group sport."

"That was a huge increase from just four years ago," about double, he said. About two-thirds of Arizona voters have now signed up to be on permanent early voting lists and automatically get their ballots in the mail, he said.

SB1003 also requires the Secretary of State to select a unique color for all inbound and outbound early ballot envelopes, to reduce the chances that people will accidentally throw them away or misplace them and then vote at the polls.

SB 1263 aims to close loopholes in Arizona law relating to paid petition circulators, Reagan said, and reduce lawsuits over initiatives. It requires circulators to submit more information to the Secretary of State, who also supports it.

The Secretary of State's Office found some circulators were felons when petitions were challenged and reviewed, Reagan said.