Public invited to see condors released to the wild Saturday 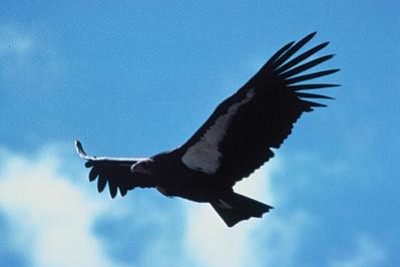 Courtesy photo<br> Condors (shown nesting below) will be released to the wild at Vermilion Cliffs 11 a.m. Saturday.

Three endangered California condors will be released to the wild in the Vermilion Cliffs National Monument in northern Arizona at 11 a.m. Saturday.

The public is welcome to observe the release from a viewing area where spotting scopes will be set up, and experts will be available to answer questions.

This will be the 17th public release of condors in Arizona since the recovery program began in 1996. Condors are hatched and reared in captivity at The Peregrine Fund's World Center for Birds of Prey in Idaho, Oregon Zoo, Los Angeles Zoo and San Diego Wild Animal Park, then transported to Arizona for release to the wild.

Currently 78 condors are flying free in the rugged wildlands of northern Arizona and southern Utah. Three were born this year in Arizona, at Vermillion Cliffs National Monument and Grand Canyon National Park. A total of 18 chicks have hatched in the wilds of Arizona since 1996.

The world's total population of endangered California Condors is 405, with a total of 226 in the wild in Arizona, Utah, California, and Mexico. Condors were reduced to just 22 individuals in the 1980s when the program was started to save the species from extinction.

When California condors were reintroduced into Arizona in 1996, a special provision of the Endangered Species Act, the 10(j) Rule, was used by the U.S. Fish and Wildlife Service to obtain acceptance among communities in Arizona and Utah that strongly opposed the reintroduction. This rule classifies the Arizona-Utah condor population as experimental and not essential to the species' survival.

Condor conservation in Arizona is funded in part by the Heritage Fund, a voter-passed initiative that provides money for wildlife conservation with revenue from Arizona Lottery ticket sales.

To view the condor release, drive north on Highway 89 out of Flagstaff. Turn left (west) onto Highway 89A toward Jacob Lake and the North Rim of the Grand Canyon. Drive about 40 miles past Marble Canyon until you turn right onto House Rock Valley Road (BLM Road 1065). Travel about three miles to a shaded viewing area on the right. On top of the cliffs to your east will be the location where the condors are released.

The new chicks are expected to fledge or take their first flight from the nest in late fall. Young condors are dependent on their parents for about 18 months.

However, these birds face significant challenges in growing their population. Not only does it take six years for most to reach breeding maturity, but they also produce only one egg every other year.

In addition to the species' slow reproduction, lead poisoning continues to be the leading cause of death for condors in Arizona-Utah, with 23 deaths confirmed since 2000.

Condors ingest lead fragments after eating gut piles and animal carcasses that have been shot with lead ammunition. The bullets disperse dozens of tiny particles of lead as small as a grain of salt throughout the animal. These particles are enough to cause lead toxicity in condors when they scavenge on the remains.

Since 2005, the Arizona Game and Fish Department has offered a voluntary non-lead ammunition program for hunters in northern Arizona, the condors' core range. The U.S. House of Representatives has approved the Sportsmen's Heritage Act that would prevent the federal government from banning lead shot. Rep. Paul Gosar of Flagstaff supported the bill. It also would require state approval before presidents could create national monuments, among other things.