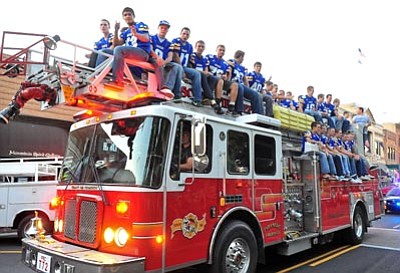 As Prescott High School football player Joe McCarty was about to get on a Prescott Fire Department engine for the homecoming parade, he said he was looking forward to the football game on Friday night.

"It's a pretty big game," said McCarty, a senior, about playing the Cactus Shadows Falcons from Cave Creek.

People lined the courthouse plaza Thursday night to watch the parade, cheer on the team, take photos and videos of their kids in the parade, and visit with friends and neighbors.

Jacqueline Licavoli, a PHS senior, said she was at the parade to support her brother Tony Licavoi, part of freshman royalty.

"Homecoming is one of the most fun events at the school," Jacqueline said. "The football game is the best and everyone participates."

Albert and Clara Guzman were at the parade to support their daughter Adriana, a senior, who is homecoming royalty - and because it's a family tradition.

"We've come to the parade every year and we've being doing it since the kids were little," Clara said, adding that Adriana's older brothers, Albert and Anthony, had played football for PHS. "It's just so awesome to see the community come together. This is what Prescott is all about."

The Prescott High School Young Democrats, Young Republicans and Independents marched together in a show of election year solidarity, and Rick and Melanie Guzman were there to see their daughter Elise Guzman, a junior, march with the group.

Carol David said her daughter Jackie David, a senior and president of the National Honor Society, enjoyed dressing up for the themed days during the week and, on the Seven Seas Wild Day, she and several friends wore T-shirts with the letter C on them and took photos.

After the parade, a bonfire was held at Prescott Mile High Middle School, and Michelle Copeland said her daughter Darby Copeland, a junior, was looking forward to singing there with the show choir.

"We go to all the show choir's performances," said Dennis Montgomery, a neighbor.

"The music department at the high school is so good," added his wife April.

Ruth Hughes, who was wearing her PHS alumni shirt, said her son Josh Vianello, a sophomore with the Pride of Prescott Marching Band, was excited about all the band performances, the bonfire, the game and the dance. "Following a sad week at the high school, it's good that the students get a chance to get their spirits up," Hughes said. "It's been a little more somber this year, but the students can see support from the community."