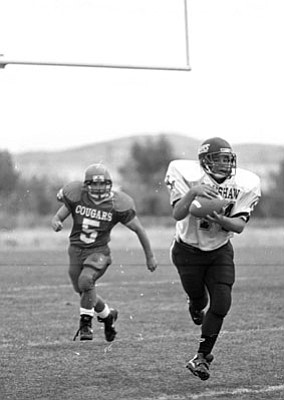 Courier file<br>Bradshaw Mountain and Chino renew their series, which started in 1993. The Bears are 5-0 all-time against the Cougars.

In the early stages of the 2012 campaign, Bradshaw Mountain and Chino Valley high schools' varsity football programs have experienced growing pains under the guidance of new head coaches.

Both teams own similar records, with the Bears sitting at 2-3 and the Cougars at 1-3, after each one snapped a three-game losing streak last Friday on the road.

Friday night at 7, Division IV No. 25-ranked Chino plays host to D-II No. 28 Bradshaw in a key contest for these clubs as they try to make a push at the season's halfway point.

First-year Bears coach Adam Schiermyer said his players are "pretty excited for this game" because they want to show how hard they've been working in practice to improve.

On Aug. 17, Bradshaw easily won its opener at Sahuarita Walden Grove, a program in its inaugural varsity season, before being blanked in blowout fashion in two of its next three contests, including a rough 40-0 loss to rival Prescott Aug. 24.

"I don't know if it has more significance than the Prescott game or not, but there's a lot of fire within the team," Schiermyer said of his Bears facing Chino. "Getting back to .500 would definitely build some momentum for these guys, and they'll feed on it."

During its three-game slide, Bradshaw felt the effects of an injury bug and the losses of senior tailbacks Troy Boyle and Riley Curry, who left the team.

However, last Friday, the Bears bounced back, defeating Mohave, 28-7, in Bullhead City.

Offensively, they did it on the ground behind senior tailback Damian Otero, who scored two touchdowns, as well as quarterback Skylor Clinton and running back Mat Moreno.

Schiermyer said the Bears were committed to running the ball while taking small strides in the passing game.

"We really wanted to establish the middle, and we did a pretty good job with that with Damian, and even Skylor, and Mat had a good game," he said. "Our offensive line is improving every week, and that's what we're asking of them."

Schiermyer said his players are improving and that he's still laboring to instill more discipline in them.

He believes that tonight the Bears must stay focused on defense in order to win.

"Controlling the edge is going to be big, and also play-action passes and any shenanigan trickery plays that we will see," Schiermyer said.

Most of the Bradshaw players are familiar with Chino Valley coach Chuck Apap - who became the Cougars' head man in the off-season after seven years at BMHS - and his wing-T offense.

Last week, Chino won its first game of the season after routing winless Camp Verde, 48-12. Three of the Cougars' best players returned to the lineup following a three-game suspension, which played a big role in the win.

"We had lessons to learn," Apap said. "With those players back, we're a different type of football team. I know a lot about Bradshaw, and they have some very, very good players. We're going to have to play just an outstanding football game to be in the game with them."

Bradshaw and Chino are no strangers on the gridiron.

From 1993-96, when both programs were in the former Class 3A, the Bears defeated the Cougars four straight times.

BMHS is 5-0 all-time against Chino, which opened its campus in 1989. The squads renewed their series in 2011 following the AIA's realignment from classes to divisions. Last Sept. 23 in Prescott Valley, the Bears won 56-6.