Prescott to host a full set of Fullset Irish music 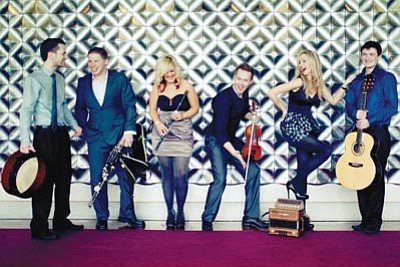 The performance is sponsored by the Prescott Celtic Music Concert Series. "This band is the new sensation out of Ireland, with amazing talent in both the instrumental and vocal aspects of their music," said series director David McNabb.

The ensemble consists of Janine Redmond on button accordion; Sean McCarthy on ulleann pipes and whistles; Michael Harrison on fiddle; Eamonn Moloney on bodhran; Andrew Meaney on guitar; and Teresa Horgan on vocals and flute.

Fullset released its debut album, "Notes at Liberty," in 2011 and won widespread accolades. The band's performances have taken them to festivals and venues across Europe.

Fullset's Prescott concert begins at 7 p.m. Tickets are $20 in advance, $22 at the door, $5 for college students and free for youths under 19. Advance tickets are available at Celtic Crossings Pub at Prescott Gateway Mall. For information, call 602-482-8598. To learn more about Fullset, visit www.fullsetmusic.com.