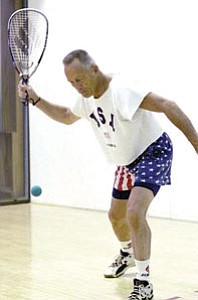 Prescott's Jerry Northwood is at it again.

Northwood, 75, has competed in this event in 27 of the past 28 years. He grabbed a first-place gold medal, along with partner Mildred Gwinn of North Carolina, in the 70+ mixed doubles category.

Then in the 75+ men's singles division, he earned another gold for his 14th career world title. Five of six players in the field were past world champions, and Northwood defeated all challengers.