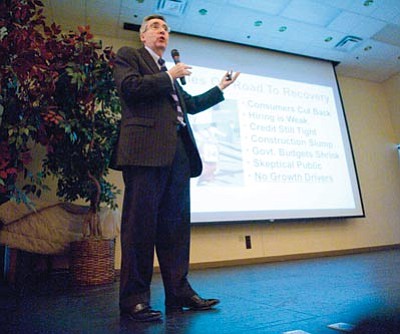 Les Stukenberg/The Daily Courier<br>Lee McPheters, director of the JPMorgan Chase Economic Outlook Center and research professor of economics at ASU, speaks on the state of the economic recovery at the Rowle P. Simmons Community Center Wednesday.

PRESCOTT - The Great Recession officially ended in July 2009, but the recovery has been slow in terms of job growth in the Prescott metropolitan market, the state and the nation as a whole, according to an economist at Arizona State University.

The job growth since then has not made up for the 8.8 million jobs lost nationwide since the recession, Lee McPheters told about 200 people during an economic outlook seminar Wednesday in the Rowle P. Simmons Community Center. He is the director of the JP Morgan Chase Economic Center and research professor of economics at the W.P. Carey School of Business at ASU.

The nation regained 4 million jobs since the depth of the job losses in February 2010, and Arizona regained 87,000 of the 314,000 jobs lost during the recession, McPheters said.

Job growth is anemic in the Prescott market, and it will take an annual growth rate of 2 percent over nine years to restore all job losses, McPheters explained. In fact, he said he does not expect the economic recovery to take place nationally until 2014, and is three to four years away for Arizona.

McPheters, who has taught at ASU since 1976, spoke at a program that the Prescott Area Commercial Real Estate Group, ASU Foundation Presidential Engagement Programs and ASU Alumni Association sponsored.

While he cited a number of statistics during the two-hour program, McPheters also peppered his talk with jokes and the overhead display of cartoons and humorous photos that provoked laughter from the audience.

"We are going to look at the economy from 40,000 feet," McPheters said during the start of his talk.

McPheters talked about growth in gross domestic product (GDP) in Mexico, Brazil, India, China and other emerging economies, and compared it with the slower GDP growth rate in the United States, Canada and Japan. He added Arizona's economy is similar in size to that in Thailand.

"We are not in a global recession," he said. However, he added the global economy poses the main risk to the recovery in the United States.

"What's driving this economy?" McPheters asked rhetorically. "Nothing. There are no drivers."

He said low-wage jobs account for 40 percent of the job growth, while middle-income jobs declining.