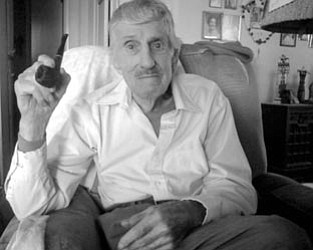 Edward Paul "Ed" Romanek passed away peacefully at the age of 92 on Aug. 25, 2012, at the VA Medical Center in Prescott. Ed was born Aug. 4, 1920, in Diorite, Mich., the eldest son of Peter John Romanek Sr, and Stephanie Marion Gucwa Romanek, both Polish immigrants.

A very special person in his life was his stepfather, Walter J. Markiewicz, whom he called dad since his father Peter passed away when Eddie was young. Ed was a decorated Marine and veteran of World War II who served on the USS Lourline and was in locations such as Tiapan, Sinian and Tarawa. After WWII, Eddie worked at Ft. Whipple in Prescott, through which he would meet and later marry Joan Marilyn Demers in 1950. Joan and Ed moved to Wisconsin where their three sons were born. In 1959, they moved to Phoenix where he worked as a general contractor.

The Romanek family purchased property on Thumb Butte in the early 1960s where together they built a summer home. Eddie and Joan retired to Prescott in 1978.

He is survived by his three sons, Steve (Sharon), Paul, Tom (Princess); 12 grandchildren; and four great-grandchildren.

Ed was buried Aug. 28, 2012, in Mountain View Cemetery beside his loving wife Joan whom he never stopped missing after her death in 1995. Eddie received a burial service with full military honors.