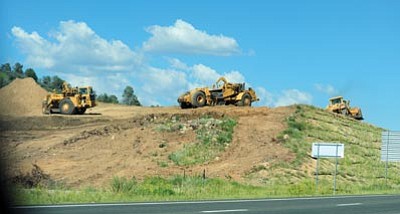 Les Stukenberg/The Daily Courier<br>Fann Contracting will build two extra lanes on Highway 69 between the tribal connector and the road up to the Prescott Resort to make that stretch of Highway 69 a six-lane road.

Work is underway on the intersection of Highway 69 and a new road that runs across tribal lands to connect to Highway 89.

The tribal connector intersection at Highway 69 across from the Target store received a permit from the Arizona Department of Transportation a few weeks ago, said Bob LaJennesse, ADOT assistant district engineer.

Fann Contracting started bulldozing a haul road last month along Highway 69 between the tribal connector and the road up to the tribe's Prescott Resort, he said.

The contractor will build two extra lanes on Highway 69 between the tribal connector and the road up to the Prescott Resort to make that stretch of Highway 69 a six-lane road, he said. All the widening will take place on the north side of the highway.

ADOT officials are still waiting for a construction schedule from the tribe, but tribal officials told ADOT they hope to have the connector road open to the public by the first week in December, said Tricia Lewis, Prescott District senior community relations officer for ADOT. Final paving and striping will have to wait until it's warmer in the spring of 2013.

Tribal officials declined to comment on the project until after the tribal board meets Tuesday.

The road has faced numerous delays.

Commonly called the tribal connector, the as-yet-unnamed road will be the shortest way to get from Highway 89 to Highway 69 in Prescott since ADOT redesigned the 69/89 intersection in late 2009 and prevented drivers from turning left off Highway 89 onto Highway 69.

The new road will have a gentler slope than the nearby Prescott Lakes Parkway.

It was originally planned to be an alternate route during the construction of the new intersection of highways 69 and 89.

The connector road has been paved for about a year, but the tribe had to redo its 2005 traffic study last year, and the new study led to changes in the Highway 69 intersection design, LaJennesse said.

ADOT, Yavapai County and the U.S. Bureau of Indian Affairs are contributing money for the new connector.

It's been a long process to get full funding for the road, ADOT District Engineer Alvin Stump said.