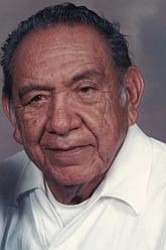 Joseph "Joe" Nodal, 85, was called home to be with the Lord Jesus on Oct. 25, 2012. He passed peacefully in his home surrounded by his loving family.

He is survived by his wife of 55 years, Josie, and five children, Rita, Dolores, Colleen, Stephen and Conrad. He was preceded in death by his son Joseph Michael Nodal Jr.

He was born on Feb. 24, 1927, in Prescott and graduated from Prescott High. He joined the Navy, served our country for eight years, and then attended Arizona State. He returned to Prescott, married Josie and worked at the Iron King mine until they relocated to Southern California in the early 1960s. He retired and returned to Prescott in 1985 after a long career as a foreman at Bliss Laughlin Steel. Upon returning to Prescott in 1985, he was unsettled with retirement and took a job with the Arizona Pioneers Home until he retired a second time in 1994. He spent his remaining years gardening, shopping, solving crossword and Sudoku puzzles, and taking local scenic drives (his most favorite activity).