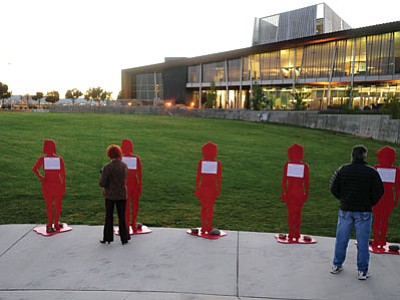 Life-size cutouts of Arizona women who died as a result of domestic violence were on display at the Take Back the Night ceremony and vigil at the Prescott Valley Civic Center Wednesday night.<br> Photo courtesy Les Stukenberg

Ashley, a victim of domestic violence, said she and her children left her abuser after receiving an eviction notice, and being verbally and physically abused between calls to see if anyone could help them.

Ashley said her landlord called police after she heard Ashley say "please don't hit me" before hanging up.

Before police officers arrived and arrested him on misdemeanor assault per domestic violence charges, Ashley said her abuser grabbed a shotgun, showed her the shells in it, and said, "One for you and one for me."

"By the grace of God, he put it away," Ashley said.

"We must stand together to show that domestic violence is not tolerated in our community," said Lora Lee Nye, a Prescott Valley councilwoman. "Tonight we want to honor those who lost their lives to this violence here in Yavapai County. Not a single one of them is forgotten."

People at the vigil spoke with representatives of community agencies, read stories on life-size cutouts of Arizona women who died as a result of domestic violence, and took part in a ceremony honoring victims.

When asked why she had stayed, Ashley said it was for love, hope, fear and shame.

"The love that we first experienced at the beginning. The hope if I just do this, he will be better," Ashley said. "The fear, 'If I leave, what's going to happen? Is he going to come after me?' And the shame of having to admit you are a victim."

After police officers arrested her abuser, Ashley said she felt relief and fear.

"I had such an overwhelming relief that he was gone, but at the same time such a fear of what I was going to do as a single mother of two and how would people understand," Ashley said.

"The success of our Family Violence Unit is our dedication to the victims in completing thorough investigations," Fessler said.

Ashley said she now is completing her degree in social and human resources so she can become an advocate for victims of abuse.

"It may be hard to get away, but it is worth the journey," Ashley said.