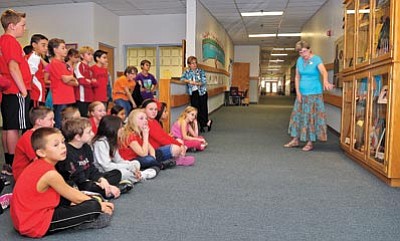 As students gathered around a display case filled with photos of Abia Judd Elementary School's namesake - along with his ID badge, ties, and the hard hat he wore when he visited the construction site of the Prescott school - Mary Anne Kapp asked students why an exhibit about Judd was created.

"Because he was a very righteous man and he showed great character," said Kaley Sorenson, a fifth-grader.

The unveiling of the display case honoring Abia Judd Tuesday marked the 25th anniversary of the school's dedication ceremony in 1988.

"When it came time to name the school, Abia Judd's name came up real quick," said Craig Spillman, who was on the school board at the time.

Terry Robertson, Abia Judd's daughter, told stu-dents her father was born in 1907 in Fredonia, a farming community in northern Arizona near the Grand Canyon's north rim.

"His first day of first grade - they didn't have kindergarten then - his sister walked him to the hallway outside his classroom, then went to hers," Robertson said. "He turned around and ran home, but they brought him back to school, and he used to say he was in education ever since."

Robertson said her father never said much about it, but his mother died when he was just nine years old.

"His father encouraged him to go to school to teach," Robertson said.

Judd taught sixth grade at Lincoln School in 1936, served as a combat intelligence captain in the Air Force during World War II, married Grace Heaton from his hometown of Fredonia, and they raised three children together.

When a student asked about a kachina in the display case, Robertson said it was an award for Judd's volunteer work with the Prescott YMCA, West Yavapai Guidance Clinic, Easter Seal Society, and the Boy Scouts of America.

"Abia Judd was a man of character who was dedicated to helping children, exemplified the six pillars of the school's Character Counts program, and was very involved in our school," Abia Judd Elementary School Principal Rosemary Agneessens said.

Judd often visited students in their classrooms to talk about what they were learning, collected product labels from neighbors and friends to help buy students computers through Labels for Education program, and celebrated his birthday each year with students, staff, and the community in the multipurpose room, Kapp said.

"As past principal, I'd get telephone calls saying, 'Hey, Mary Anne can you come down and work with the kids? They're doing reports on Abia Judd,'" Kapp said. "People really didn't know who Abia Judd was, and that broke my heart."

So Kapp met with Carol Yetman, Jane Robertson and Denise Roscigno - three members of the original staff still working at the school - and Terry Robertson, and worked with Sylvia Neeley and George Fuller at Sharlot Hall Museum on the exhibit.

"It's so important to relate to children that this man was not a rock star - he was a man of character," Yetman said. "This case shows how he lived by the pillars of character they learn about, and it makes it so meaningful."

When Kapp asked students what a legacy is, Alex Pleva, a fifth-grader, said it was something you leave behind. Then Kapp asked the students to take care of the exhibit so future students would know about the man their school was named after.

"We're all excited, because we're a family at this school," said second-grade teacher Jane Robertson. "Now every kid who goes here will know who Abia Judd was an what he stood for."