Tobacco tax fight reveals what matters most to Arizona voters 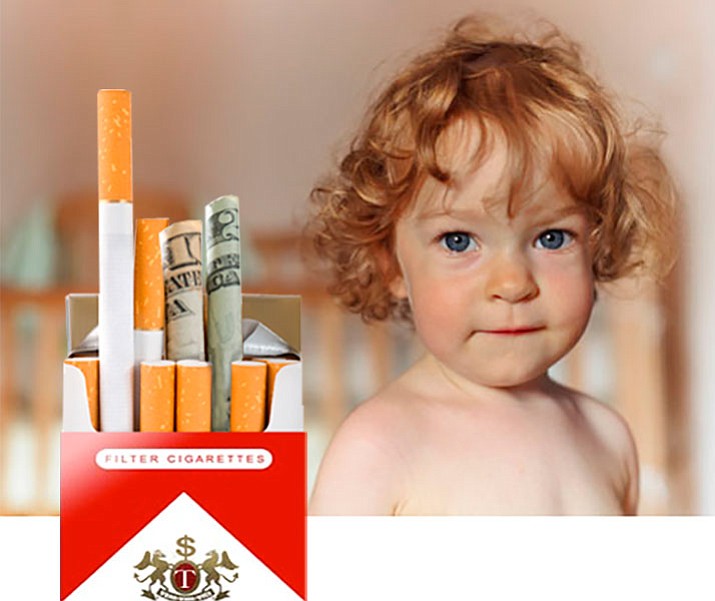 On the upcoming November Arizona ballot Prop 204 is a continuation of the one cent sales tax.

In November 2006, during a booming economy, Arizona voters increased taxes on a pack of cigarettes by 80 cents to fund a program we may not remember or know much about today.

Now please don't get me wrong, I am not writing this to be critical of some mysterious program reluctantly funded by Arizona smokers. This introduction is meant to be a timeline of perspective -- to show what happens when voters are asked to tell legislators, with their votes and their money, what really matters most.

In 2010, four years after the tax increase and in the midst of the worst economic crisis since World War II, a proposition was placed before voters to kill the program they had originally approved. It proved to be a bitter battle -- a fight, the results of which, would be very revealing and relevant to voter issues we are facing again in November. Prop 302 would put the program's $324 million into the state's beleaguering general fund, to be rerouted to other services in an attempt to stop a bleeding budget.

One question the proposition inherently placed before voters was, who would you rather have deciding where tobacco tax money goes, volunteers in local communities or legislators.

The program was called First Things First. If you don't know what it is, you are not alone.

John Kavanagh, a Republican member of the Arizona House of Representatives, supported the proposition to kill First Things First, explaining, "Most people have no idea what they're doing."

Two years after the kill effort, the program is still active and being funded by the tobacco tax. Voters overwhelmingly shot down the proposition, with nearly 70 percent in favor of keeping First Things First alive.

Why? I think it is because First Things First supporters were able to show voters at the time that the program was a rare gem, one that worked forward rather than backward. It is about helping Arizona Children birth through age five during the most critical time of their lives. It represents the difference between a government that wants to build bigger prisons versus people who want to first build better lives for children. It's about putting first things first.

Maricopa County Public Health Director Bob England emphasized First Things First's preemptive power, "Those kids grow up and have 80 percent fewer encounters with the juvenile justice system. So that's 80 percent less need for courts, for juvenile detention, and by implication, probably many of those kids would have wound up in jail....They tend to save us money on the back end. That means that had we been doing this stuff 10 or 20 years ago, we would have had that much less of a financial crunch, a budget crunch, than what we're facing right now."

But six years after its inception many Arizona residents still do not understand what the tobacco tax really does. To give us a clearer snapshot, I asked Claire Louge to answer six questions for us.

1. In 10 seconds or less, how would you explain what First Things First stands for?

Claire Louge: 90 percent of a child's brain develops before kindergarten. The brain connections made in the early years lay the foundation for success in school and in life. First Things First works to make sure all young children in Arizona, ages birth to five years old, are healthy and ready to succeed when they enter school.

2.What is it that might surprise people when they learn specifics about First Things First?

Claire Louge: Most people are surprised to learn that these funds are locally controlled. In this region, we have our own council that decides what kinds of programs need to be funded for young children in Yavapai County and Sedona. The council focuses on supporting programs that make a positive impact on school readiness for young children.

3.Can you give an example of something First Things First has accomplished?

Claire Louge: Because of First Things First, more children have access to high quality early learning programs, including age-appropriate learning materials, lesson plans focused on language and literacy; and teachers trained to work with infants, toddlers and preschoolers. Through home visitation and community-based classes, hundreds of parents have support so that they can feel more competent or confident as their child's first teacher.

4.What is one of the most common issues parents may deal with alone, not knowing that First Things First can help?

Claire Louge: There are lots of issues that parents of young kids deal with on their own -- everything from whether their child eats enough, babies that cry all the time, wondering if their child's development is on track or behavior issues. There is one resource that can help with all that, and so much more. The Birth to Five Helpline is free to parents and caregivers of kids 5 and younger. It's staffed by experts that can help parents or caregivers with any early childhood question, no matter how big or small it may seem. The number is 1-877-705-KIDS.

5. What irks you personally as you try to move forward in this effort to help children in Arizona?

Claire Louge: In some people's eyes, Early Childhood is an afterthought. Many people don't realize that early childhood is an issue that affects us all - now and in the future! Quality early childhood programs mean kids are ready when they start kindergarten. Ready students means they are more likely to graduate from high school and go on to college. More educated workers mean more productive citizens, which in turn means a better community for all. We need to recognize that early childhood is where a child's education begins; if we want a world-class education system, we need to include the early years.

6. If someone wants to make a difference in improving education, healthcare or family support for these young children, what would you suggest?

Claire Louge: Get involved, get engaged and get 'em ready! To get informed, visit azftf.gov/brains to learn about early childhood and how it impacts you. You can also have us make a presentation to a group you are active in -- at work or in your volunteer work.

To get engaged, join First Things First on Facebook (AzFirstThingsFirst) or follow us on Twitter (@azftf) and share what you learn with others. Help us spread the word on the importance of early childhood. And finally, get 'em ready. Apply to serve on our Regional Council, which is responsible for determining where our local early childhood funds are spent. We currently have an opening for a Business Representative and a Member at Large. You can check out the application at www.azftf.gov/apply.

The more support we give to young kids in our community, the better prepared they will be to succeed in kindergarten and beyond!

As a journalist and a parent who has raised five children in Arizona, my heart aches with every story I read about our young people struggling to succeed. Arizona continues to have one of the highest high school dropout rates in the country, and still we are among the very bottom when it comes to education funding.

In 2010 when voters were asked to kill First Things First, they were also asked to vote yes on Prop 100, a measure that raised taxes by one cent per dollar to fund primary and secondary education, health and human services and public safety. More than 64 percent of Arizona said yes to Proposition 100, proving once again that when it comes to our children, Arizonans are willing to invest in their future, and put firsts things first.

On a Related Vote Note:

On the upcoming November Arizona ballot Prop 204 is a continuation of the one cent sales tax we are already paying, and a tax we already solidly approved. It is not a new tax. It guarantees more money goes into our schools, which are currently last in the nation in per-student funding, and it makes sure short-sighted legislators cannot cut school funding even further. For more about Prop 204 visit www.notaspecialinterest.com.

One late addition I would like to add to this entry considering all the discussion in the thread below. This BRAIN HERO video is less than 3 minutes long, but it explains a lot.

Brain Hero by Center on the Developing Child at Harvard University