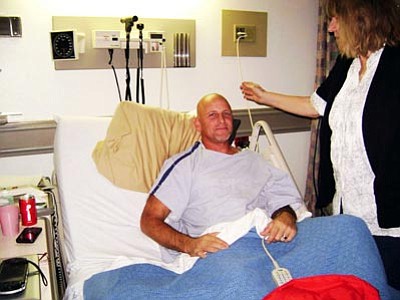 Courtesy photo<br>Carl Collins was left with few options when budget cuts to the Arizona Health Care Cost Containment System left him without coverage for post-transplant costs to treat his lymphoma. A fundraiser at the PCA Gallery Friday will raise money to go toward his medical bills.

Friends of Prescott artist Barb Wills are gathering around her with support so that she can continue helping her brother who is battling a rare form of lymphoma. Wills' brother, Carl Collins, was diagnosed with cancer in December 2010. Since that time, the family has been on a financial and emotional roller coaster.

In order to help get Carl and his family through the next few months, until he qualifies for Medicare's chronic illness coverage, Wills' fellow artists plan a fundraiser in the Prescott Center for the Arts Gallery, located in the lower level of the theater at 208 N. Marina St. The benefit will be from 4 to 7 p.m. Friday, Oct. 26, and will feature tapas and sangria and music by Terry Furlong and Don Cheek. The suggested donation is $20 per person. Both the food and music are being donated, so all proceeds will go to the Collins family.

Collins, who lives in Phoenix, was diagnosed with mantle cell lymphoma nearly two years ago. Other than a small lump in his neck, he had no other symptoms. But when a full-body scan lit up, showing cancer in many parts of his body, treatments began.

"Chemo for this cancer is extremely aggressive," Wills said. "He ended up in the hospital for two weeks with each treatment." This lasted six months, and after that, this form of lymphoma requires a stem cell transplant. Otherwise, "It's terminal," she said.

Wills is one of six living siblings and "won the jackpot" when testing confirmed that she was almost a perfect DNA match with her brother.

She emailed her family and said, "See, I always win."

Before he could have the transplant, which took place at the Arizona Cancer Center at University of Arizona, he had to go through more chemo and other therapies to completely wipe out every white cell in his body.

"It was pretty brutal," she said. In September 2011, while Carl was undergoing chemo treatments to destroy his white blood cells, Wills received injections to increase her stem cells. When her stem cell count reached a certain number and Carl's white cells were gone, "they started pulling stem cells out of me," she said. This meant she had to lie perfectly still in a hospital bed with two intravenous (IV) tubes in each arm. Her stem cells were pulled out and captured in an IV bag, and her blood was returned to her through her other arm. This took five hours each of two days.

Hospital staff then took the IV bag to Collins' room, where his nurses sang "Happy Birthday," Wills said. "In 15 minutes he had my stem cells," which were administered through an IV line.

Throughout Collins' illness and treatment, his family has joked around a lot, finding some little things to chuckle about, Wills said.

When the transfer of her stem cells into her brother's body was complete, Wills' husband, Larry, said, "If you think you're right all the time and you get bossy, you'll know it took."

Collins returned home from Tucson in December 2011 and is now in a sustaining mode, Wills said.

Collins and his wife, Robin, found themselves in an insurance quagmire when state budget cuts in the Arizona Health Care Cost Containment System left him without coverage for any post-transplant costs after July 1 of this year. Robin decided to go back to work as a medical assistant in a family medical office "because I don't want to be a charity case," she said, but she makes too much money for the family to qualify for AHCCCS.

In March 2013, Carl will qualify for the Medicare coverage because he will have been on Social Security disability for the required two years.

He is supposed to go to the transplant center in early December for testing. A recent scan showed the cancer has returned to the lymph nodes in his neck, Robin said. But, because the family can't afford more bills, any further treatment is at a standstill, she said.

Carl's greatest hope is to live long enough to see his two sons, a 6th-grader and a 7th-grader, graduate from high school, Robin said.

But, for now, Carl and Robin are "just trying to make it until March" and they continue to look for affordable health insurance until he goes on Medicare.

Artist Maria Lynam, who is on the PCA Visual Arts Committee with Wills, conceived the idea for Friday's fundraiser when she saw "the stress this family is going through," both emotionally and financially. When she approached the committee with her idea, "not one single person said no," Lynam said.

"She gives so much to the community that we should give back to her," Lynam said.

Both Collinses are overwhelmed by the generosity of Prescott people. "There are no words that can express our gratitude," Robin said. "I want my husband to see his sons graduate high school."

Carl is taken aback because "people I don't even know" are organizing the fundraiser. "It's incredible that people would reach out like that. "

The past two years have been "a complete life-changing experience since you first hear those words - 'you have cancer.' The perspective you have on things you take for granted changes completely," he said.