Taking a stand: Domestic violence remains a cause for concern 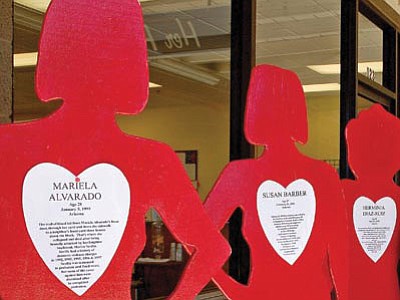 Life-size figures representing Arizona women who have died from domestic violence will be on display at the Take Back the Night candlelight vigil Oct. 24 in Prescott Valley.

Last week, a Prescott woman said her boyfriend choked her after they argued about a Halloween decoration. He told officers he was only holding her down as she punched him, and he was jailed on felony charges of aggravated assault per domestic violence, according to a Prescott police report.

One in four women experiences domestic violence in her lifetime, women of all races are equally vulnerable to violence by an intimate partner, and this violence affects people regardless of income, according to Bureau of Justice statistics.

It can be difficult for officers to determine who is the primary aggressor and to separate injuries and defensive wounds as they do their investigation, Williams said.

"We're trying to get the dual arrest numbers down," Williams said. "Ninety to 95 percent of calls have a predominant aggressor and we're getting better at determining that."

The Coordinated Community Response Team is a group of local agencies that work together to intervene and prevent domestic and dating violence, sexual assault, child abuse and stalking by advocating empathy, respect, education and connecting people in need with resources in Yavapai County.

At a recent meeting, members discussed a domestic violence conference they hosted, and how recent Arizona Department of Health Services directive might affect their work. They agreed to put links to their agencies on the Prescott Valley Police Department's Family Violence Unit web page, and began work on a teen dating brochure. Cori Burke with Stepping Stones said she would provide the group with their book on teen dating violence so they didn't have to start from scratch.

Chris Peebles with Arizona Behavioral Counseling expressed concern that the new ADHS directive might encourage offenders to shop around for the shortest and cheapest treatment program.

Next week, survivors of domestic violence will share their stories, leaders will talk about what is being done to intervene and prevent violence, and the community will honor victims.

Prescott Valley Police Chief Bill Fessler is the featured speaker at the Take Back the Night candlelight vigil on Wednesday, Oct. 24 that starts at 6 p.m. at the Civic Center Amphitheater outside Prescott Valley Town Hall at 7501. E. Civic Circle.

Yavapai County agencies that work with victims of domestic violence will have representatives to answer questions and provide information about their services at the vigil, organized and sponsored by the Prescott Valley Police Department on behalf of the Coordinated Community Response Team, Chapman said.

Life-size cutouts of Arizona women who died as a result of domestic violence will be on display at the vigil, said Kathryn Chapman, director of the Yavapai Family Advocacy Center.

"This gives the victims a voice. People can read the stories on each figure and know this is what happened to her," said Bev Beach of Prescott, who donated the cutouts for the event. "This could be your niece, your neighbor, your friend. It cuts across all economic levels."

The cutouts are similar to those created by Minnesota groups upset about the number of women dying from domestic violence in 1990. When the groups walked the cutouts, called Silent Witnesses, to the Minnesota State Capitol's rotunda for a press conference, the Silent Witness National Initiative began.

"They have a profound effect on people," Chapman said.