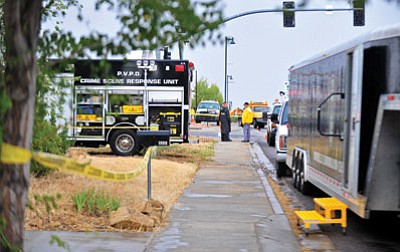 Matt Hinshaw/The Daily Courier<br> Police officers cordon off the scene of a double homicide that took place inside a home near the intersection of Robert Road and Lakeshore Drive Thursday afternoon in Prescott Valley.

A person of interest in a Prescott Valley double homicide is claiming self-defense in the shooting of his brother.

"(Daniel) was released because we had no probable cause to arrest him at this point," Bonney said. "We'll continue to process evidence and go over his statement and interview, and if we find evidence that this is not a self-defense case, then he will face charges at that point."

At 2:47 p.m. Thursday, police officers, firefighters and paramedics responded to a report of shots fired in the 3600 block of Robert Road in Prescott Valley and found two people dead in an apartment.

Daniel reportedly told investigators that he, his brother and his mother were cleaning apartment #2 in the duplex that belonged to Edward when they had a disagreement. Edward went to his apartment, #1, and allegedly retrieved two handguns, Bonney said.

Daniel told investigators that he was in a bedroom when Edward returned, and he heard several gunshots in the living room area where Edward allegedly shot and killed Elizabeth, Bonney said.

Shortly after that there was a confrontation between the brothers, which ended when Daniel shot Edward several times, killing him, Bonney said.

Anyone who has information related to the incident is encouraged to call Detective M. Hepperle at 928-772-5176.