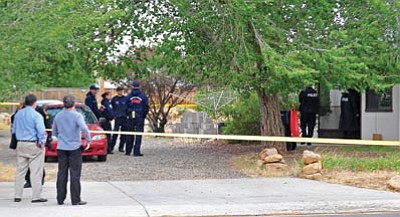 Matt Hinshaw/The Daily Courier<br> Prescott Valley police officers survey the scene of a double homicide inside a home near the intersection of Robert Road and Lakeshore Drive in Prescott Valley Thursday afternoon.

Investigators have also said that murder-suicide has been ruled out, Bonney said, adding that the victims will not be formally identified until next of kin are notified.

Shortly after the shooting, Bonney said that a man was taken from the scene to be interviewed by investigators.

At 2:47 p.m., police officers, firefighters and paramedics responded to a report of shots fired in the 3600 block of Robert Road in Prescott Valley.

The caller reported there were two victims, Bonney said.

"We searched the house and adjoining apartment and found two individuals dead inside the apartment," Bonney said. "They had obvious signs of trauma. The investigation is being treated as a homicide."

A woman nearby who did not want her name used said she did not hear or see what happened at the home earlier, but she did see officers escorting a young man with blood on him from the home into a patrol car and driving away.