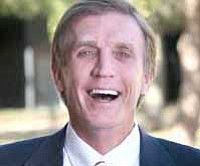 The National Cheerleaders Association confirmed a new record when a cheerleader did 35 back-handsprings in a row Tuesday. The record didn't last long.

It was broken the next day by Mitt Romney when he heard that he was only six points down in California.

Mitt Romney met Billy Graham in North Carolina Thursday and asked Rev. Graham to pray for him. He needs it. Earlier that day the White House took away Romney's Secret Service detail and replaced them with embassy security from the State Department.

Joe Biden and Paul Ryan faced off in their only vice presidential debate Thursday in Kentucky. They were well-prepared. Joe Biden jogged and worked out to train for Paul Ryan while Paul Ryan prepared for Joe Biden by holding practice debates with Dan Quayle.

Joe Biden and Paul Ryan showed both humility and humor in their debate Thursday, which connects with Americans. They've both been involved in recent gunplay. Last autumn Paul Ryan bagged a deer and two months ago Joe Biden's teleprompter shot itself.