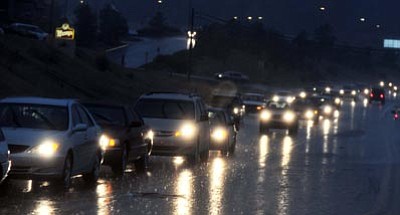 Prescott is likely to get its first rain today since monsoon season ended exactly one month ago, and it could be accompanied by severe weather.

A strong fall storm system has moved off the Pacific Ocean and is headed through Arizona today and Friday.

It could bring three-quarters of an inch of rain to northern Arizona, strong gusty winds, a 15-20 degree drop in temperatures by Friday, and even the possibility of a tornado.

The storm system is similar to one that struck northern Arizona on Oct. 5-6, 2010. It produced hail and numerous tornadoes in the Flagstaff area, as well as a few smaller tornadoes in eastern Yavapai County.

"Our severe weather expert Dave Blanchard thinks there may actually be a tornado somewhere in northern Arizona" with this storm as well, said Dave Vonderheide at the National Weather Service office in Flagstaff.

Friday's forecast calls for a 60 percent chance of rain in Prescott and high temperature of only 60 degrees. The low could drop to 40 degrees. The storm should move out by early afternoon.

Areas above 7,500 feet could get snow Friday.

This is the first time the Prescott area has seen any precipitation since the monsoon weather pattern brought its final rains on Sept. 11.

The monsoon produced a total of 5.84 inches of rain at Prescott's Sundog measuring site in July through September. That's only 76 percent of the 104-year average of 7.76 inches.

Monsoon rainfall totals were highly variable across northern Arizona, with 18 of 31 sites on a National Weather Service list getting above-average rains.

Bagdad recorded the most rain over its 30-year average of any of the 31 sites.