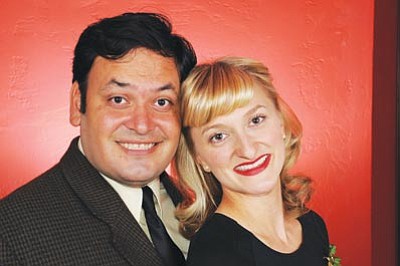 The "fun and swinging music" of Louis Prima and Keely Smith takes center stage Saturday in a salute to the famous duo at the Elks Opera House.

Alex Flores and Rebecca Carlson star in the Lonely Street Productions show, "When You're Smiling - A Salute to Louis Prima," which begins at 7 p.m. For ticket information, call the opera house box office at 777-1370 or log onto www.elksoperahouse.com.

The concert will celebrate the Prima-Smith era in music history, with tunes of their heyday, such as "Jump, Jive An' Wail," "I Wanna to Be Like You," "That Old Black Magic," and "Sing, Sing, Sing," a Benny Goodman hit that Prima wrote, Flores said.

"Their performances were risqué for the time, very suggestive back then," he said.

Carlson, "a terrific vocalist," Flores said, will be singing Smith's songs, and Flores will lead with Prima's songs. Together, the pair "is going to try to capture the goofiness and playful air" that Prima and Smith presented on stage.

Carlson performs with the Jive Bombers Band in Tucson, and Flores describes his music as versatile.

"I do anything that needs a saxophone," he said, but he emphasizes that he sings, too. He has been the front man and lead singer for 19 years for the Bad News Blues Band that has toured the world for the past 15 years.

He has been in musical tributes to Elvis "The King" Presley, and the Bad News Blues Band performs an array of tunes from blues to songs from Broadway, Flores said. He has performed with Ronstadt Generations and even offered "a little country sax for you in country bands," he said.

Prima, Flores said, was the "entertainers' entertainer." He was a favorite of everybody from the Rat Pack to other stars who performed in Las Vegas and took time to see Prima and Smith put on a show. "They all went to see Louis and Keely," he said.

Flores and Carlson will be "goofing around" on the Elks stage, reminiscent of the famous duo. "It's animated. The music is really swinging, high energy and good," he said.

"I think we've captured it" - the essence of the famous couple's, he said.