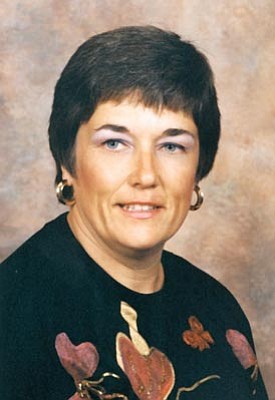 On Oct. 3, 2012, our dear mother, sister and friend, Judith Anne Raessler, left this world peacefully in her home surrounded by her family and loved ones. Judy was born in Exeter, Calif., in August of 1943 to Marvin and Lola (Coffee) Christie.

She grew up in Visalia, Calif., and graduated from Redwood High School in 1961. She then completed her LVN degree at the College of the Sequoias and RN degree at San Bernardino Community College and began a nursing career that spanned 50 years. In 1963, she married Kenneth Raessler and they had four daughters. The family moved to Tucson in 1973, and relocated to Prescott, Ariz., in 1976. She was employed as a nurse by Yavapai Regional Medical Center for 22 years. She enjoyed spending time with her grandchildren, junking with friends, quilting and crafts.

She is survived by her four daughters, Erika (James) Newcomb of Chino Valley, Ariz., Jana (Steve) Gordon of Corvallis, Ore., Kristy (Andrew) Roach of Lebanon, Tenn. and Jill (Raymond) Zogob of Prescott; and her beloved grandchildren, Christopher, Lilly, Olivia, Cooper, Stephen and Harper. She is also survived by her siblings, Kenn Christie of San Jose, Calif., Joetta Chrissakis of Dallas, Ore., Bobbi (Jack) Hutchins of Tulare, Calif., and Jeff Christie of Visalia, Calif.; as well as 11 nieces and nephews.

A creative talent with an amazing wit, she had more projects than time. She will be deeply missed.

In lieu of flowers, please donate to the cancer charity of your choice.