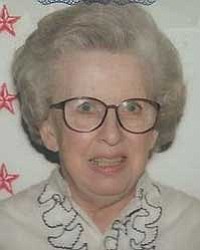 Ms. Young was born in Chicago, Ill. She grew up in Berwyn, Ill., and resided in the Chicagoland area until she married Robert N. Young and moved to Phoenix, Ariz., in 1950. Ms. Young was the daughter of Louis A. and Clara Brandt of Chicago.

She is preceded in death by her husband and two sisters, Mary Ann (Brandt) Jeans and Lois (Brandt) Blacksmith Wienecke.

Memorial tributes in her name may be made to the Arizona Humane Society or the charity of one's choice.

The Hampton Funeral Home, Prescott, was entrusted with her arrangements.